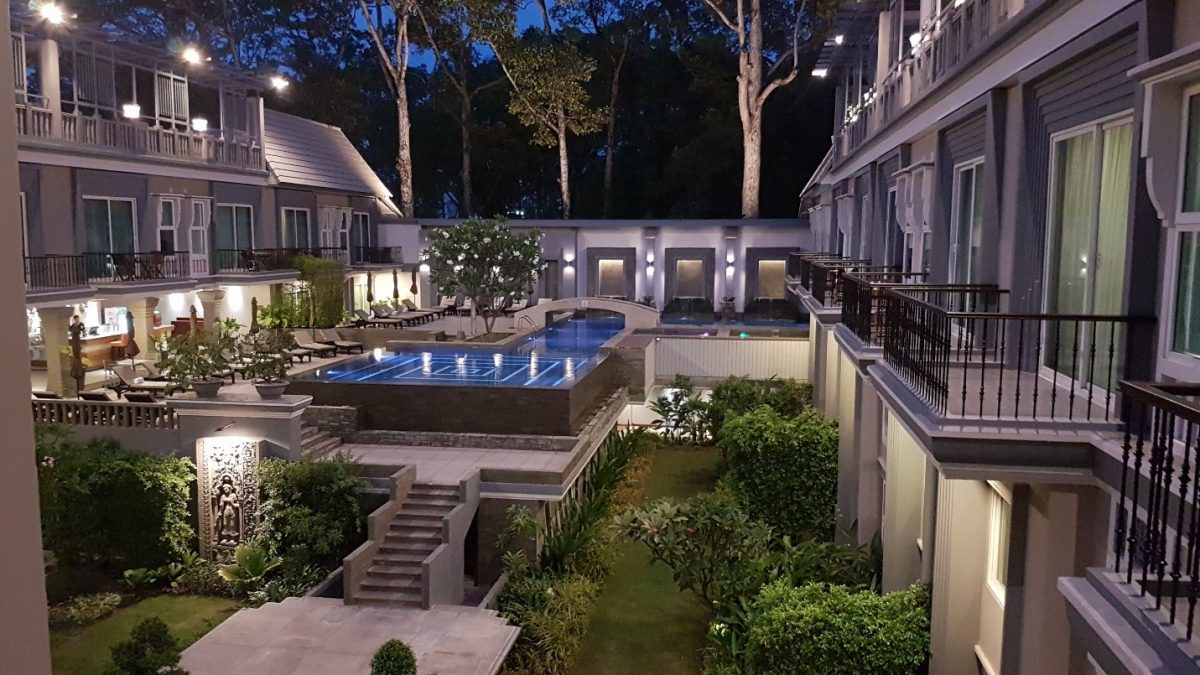 I must admit that before my adventure to Cambodia, I didn’t know where to find the country on a map. I knew it was in Asia, but my geography teacher from years ago would have given me a failing grade.  For a country steeped in such a glorious yet sad history, I was so thankful that I decided to take a leap of faith and book the flight.

In search of adventure in the Kingdom of Cambodia, I planned my journey to Siem Reap determined to see ancient temples, white-sand beaches, trek through the jungle and experience a culture that was new to me.  What I didn’t expect was the joy that I would find hidden within this unique nation.

My first adventure was the overwhelming heat of the dry season as I opened the airport doors and walked into the beautiful sunlight. I randomly selected a hotel on the internet and their driver met me at the airport with ice-cold water and facecloths. What a welcomed treat, as the sweat made its way down my face to places unknown. The drive to the hotel was taken up with my face pressed against the car window, watching the countryside pass by.  The homes were more like shanties, the buildings were simple, yet efficient, and numerous rice fields poked out between the homes. Motorcycles and tuk-tuks whizzed by with several people hanging on tightly. I was mesmerized at the dance between the cars, bikes, pedestrians and the occasional stray cow or bull, but the locals seemed to have it all worked out.

My first surprise was how incredible my ‘randomly selected’ hotel was!  Simply named ‘J7’, inspired by the King of the Khmer Empire, Jayavarman VII, the hotel had all the curb appeal you would expect from a five-star hotel. However, the magic really began when I walked through the front door. I was surrounded by pure luxury, engulfed by a lobby that was bigger than most condos in western cities. I was greeted by name with another bottle of water and a cold facecloth. The staff, each with a ready smile, made a point of knowing everyone’s name. I was escorted to my suite on the main floor, complete with a gold-leaf floral design on the door and my own doorbell!  As I opened the heavy, ornate wooden door and peaked inside, I was speechless.  The large king-size bed was the focal point of the room but the beauty of the traditional fabrics, teak furnishings, separate living and sleeping quarters, a rain shower and large soaker tub made me feel like I was sleeping in the penthouse of a large North American hotel.  This was paradise. 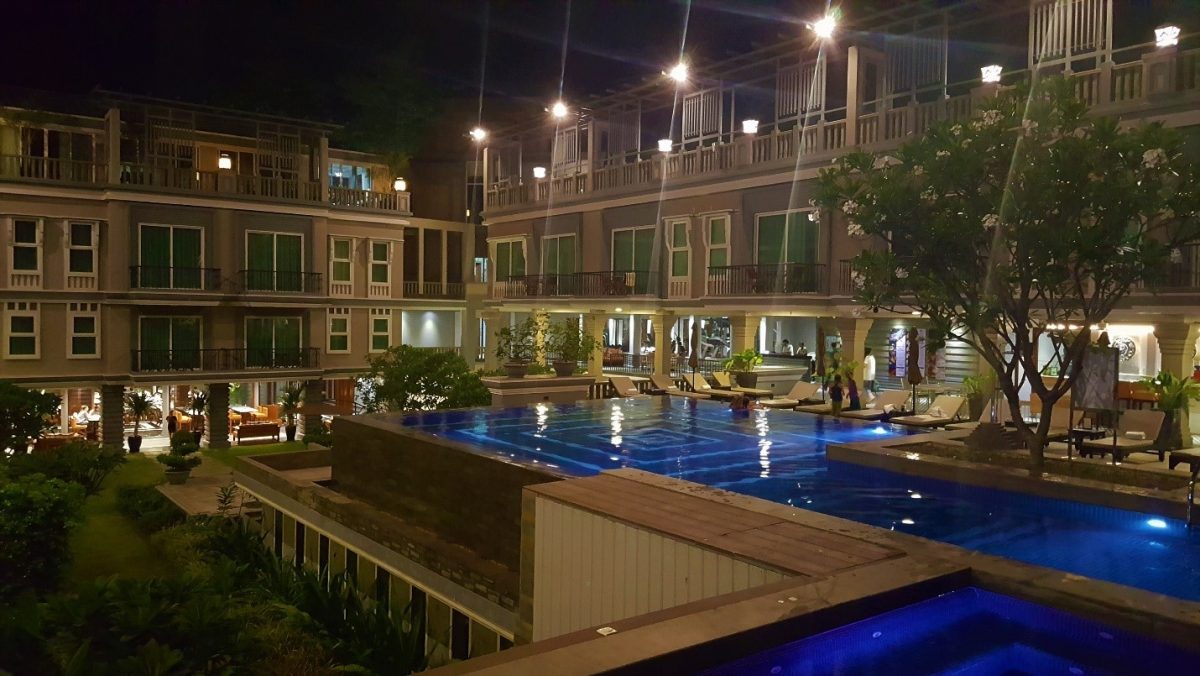 The J7 has 90 rooms surrounding a central garden with several stunning pools and a well-equipped bar. I felt like I was sitting in a sanctuary as I sat at the bar.  Gigantic trees towered over the top of the open-air courtyard.  Cambodia is technically a third-world country and one of the poorest nations in the world. This was why I felt confused about what I expected and what I found. The last place I considered myself to be was sitting in a country that was struggling.

I quickly changed and just about ran to the beautiful pools. As I floated on my back, I looked up at the bright blue sky and smelled the fragrant plumeria flowers that grew so easily in this tropical climate. Any ounce of stress that I had was washed away by a sense of inner peace. This was exactly what my soul needed in this moment. 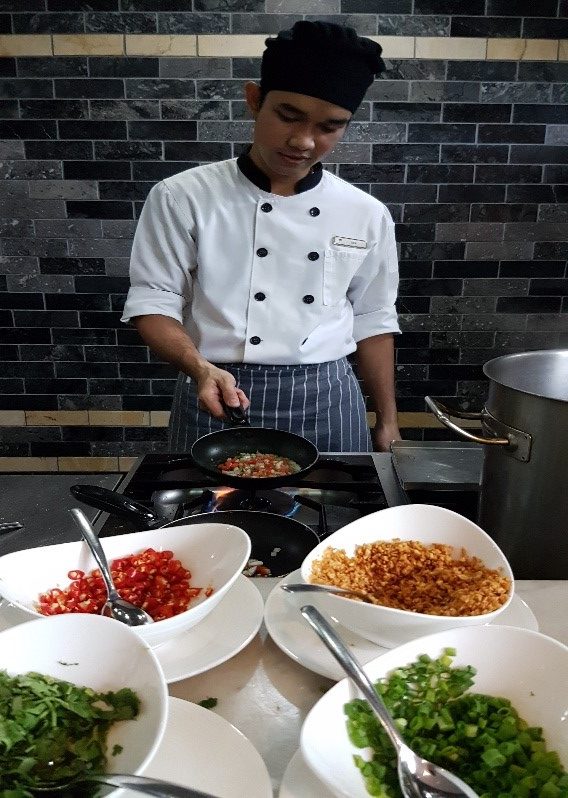 Did I mention the food? The beautiful breakfast spread was a mix of eastern and western foods.  As I walked around the long table of cheeses, pastries, homemade breads and oatmeal, the sous-chef made me a delicious omelet, while a large pot of lemongrass pho soup simmered away beside him. Executive Chef Giampaolo Maffini, an experienced Master Italian Chef, who hails from Pavia, Italy, and his team of local talent prepared some of the best food I’d had the pleasure of tasting. For dinner, the room was replaced by intimate, white-linen tables and candlelight.  As I walked back to my room, I noticed couples having romantic, candle-lit dinners on the grass complete with their own server.

Before I left for supper, I found a brochure for the Moringa Wellness Spa.  It would have been rude to pass up such an opportunity that I found myself walking towards the spa located off an open-air hallway overflowing with tropical plants. The treatment room was equipped with a large stone soaker tub which overlooked the main pool. 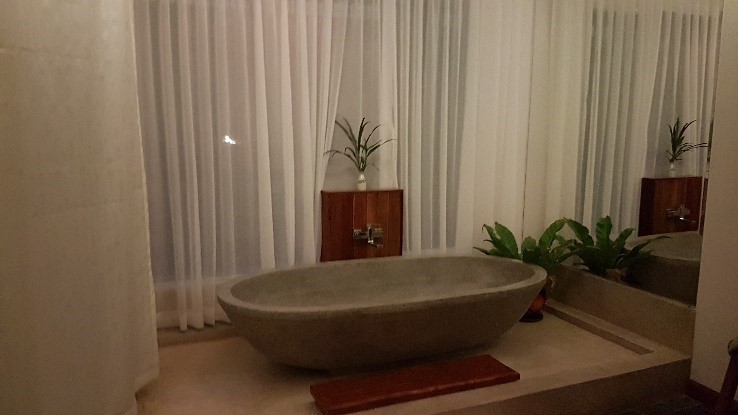 The plush robe and sandals added a nice touch. Over the week of my stay, I tried a variety of treatments, including massages and a facial as the prices were amazing and the services rivaled those from home. When I booked my traditional Khmer massage, I didn’t know what to expect, but it was all part of the adventure. I was very thankful that my therapist was a tiny woman as I opened my eyes to watch her jump on the bed and kneel on my back. I felt myself give in to the world around me as my aches and pains left the room.  I floated out of the room when the service was over, only to be seated and handed a cup of traditional Cambodia tea. I felt bad for the server who had to stay with me as I finished my tea.  Although we couldn’t speak each other’s language, we found unique ways to communicate and had a case of the giggles by the time I left, only to see her again the next night as the cost for their services was so reasonable that I checked back in again.

I know my dreams of trekking through the jungle and searching temples would happen, but there are times I must stop and remind myself that experiences come in many forms. After meeting the friendliest people and realizing that everything I could want was at my disposal, the most productive thing I could do was just relax.