May We Never Forget: A Visit to Sachsenhausen Concentration Camp 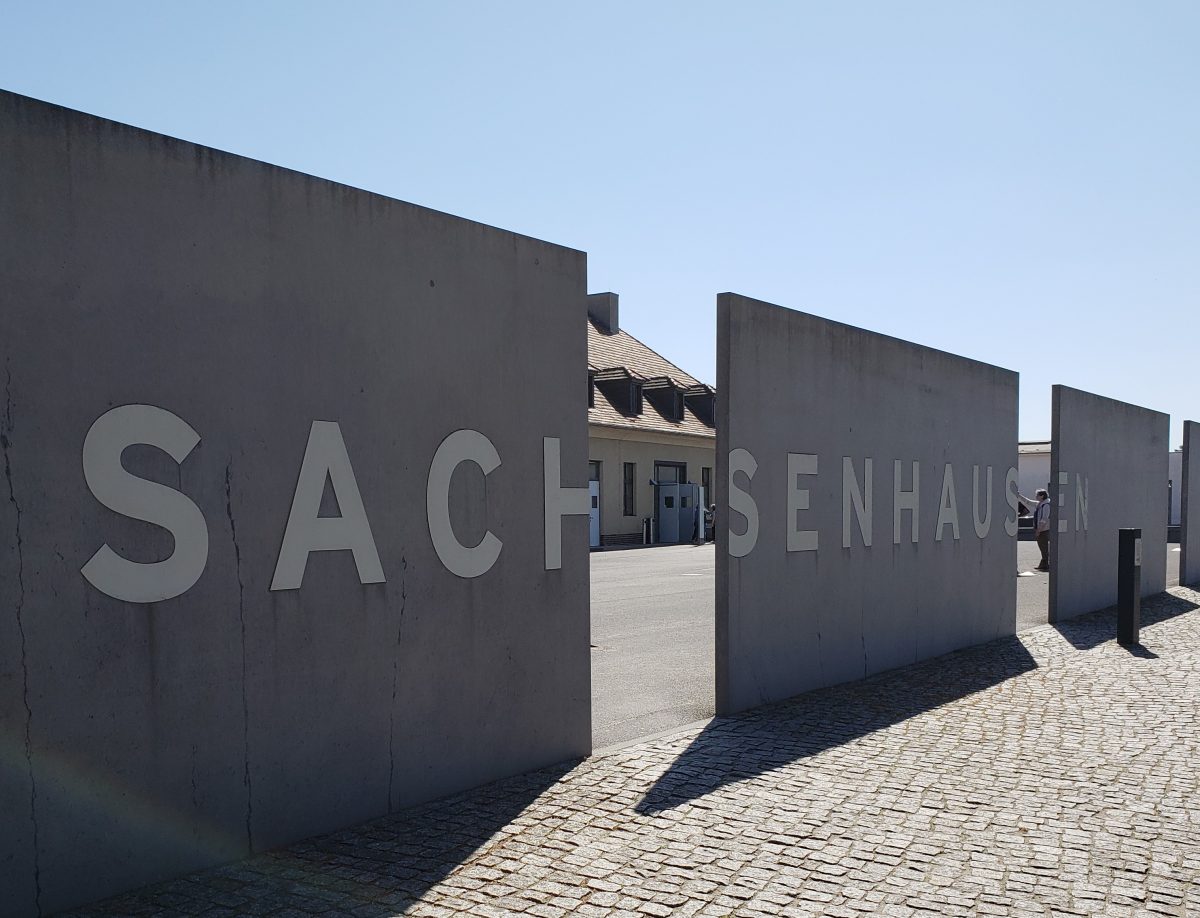 The irony wasn’t lost on me.  I boarded a train in Warnemunde, Germany at 8:12am on track 6B with a group of 32 tourists headed for Sachsenhausen Concentration Camp. Today was a national holiday in Germany, so many people were off work and the stores were closed. The streets were quiet.  It was a two-hour train ride, passing small towns, farmer’s fields and lilac bushes. The windows on the train were open and the fragrance from the lilacs danced around the car. The train moved slowly, as if on purpose.  My mind took me back to the thousands of men, women and children who took this same ride without the comforts I experienced.

Rostock station was next.  We followed a series of graffitied pipes which formed the heating system for the city. We could reach out and hold the pipes like young children walking with a safety rope. We passed Rostock without stopping. The rolling fields were distractions from our ultimate destination. The train sped up suddenly and we sense we are getting closer. I feel a certain level of anxiety from not knowing what laid ahead.  Who was I to experience anxiety when I didn’t share any of the lived experiences of the camp’s prisoners and I didn’t have any personal connection to Sachsenhausen. As we inched closer, I felt a responsibility to understand and share the experience of those who passed through this concentration camp.

We arrive at Oranienburg Station and walk to Sachsenhausen. As we approach, we make our way through a staggered entrance which announces the Sachsenhausen Memorial and Museum. Sachsenhausen is the closest major former Nazi concentration camp to Berlin. It opened in July 1936 and was a fully purpose-built camp to house 8000 prisoners.  It was extended in 1938 to hold 10,000 prisoners. Sachsenhausen was a working labour camp where everything produced was the product of slave labour. In the beginning, it was built to house political prisoners. Over 200,000 men passed through the camp. Although there are varying numbers on how many prisoners died, it is estimated that between 30-45,000 prisoners died before the camp was closed in 1945.

As we walk through the main gates, it is hard not to notice the inscription in the wrought iron. Arbeit Macht Frei: Work Makes (you) Free. There is a certain amount of irony in this statement as this was a labour camp, and hard work turned into more work. This phrase is a slogan commonly placed in many Nazi concentration and death camps. 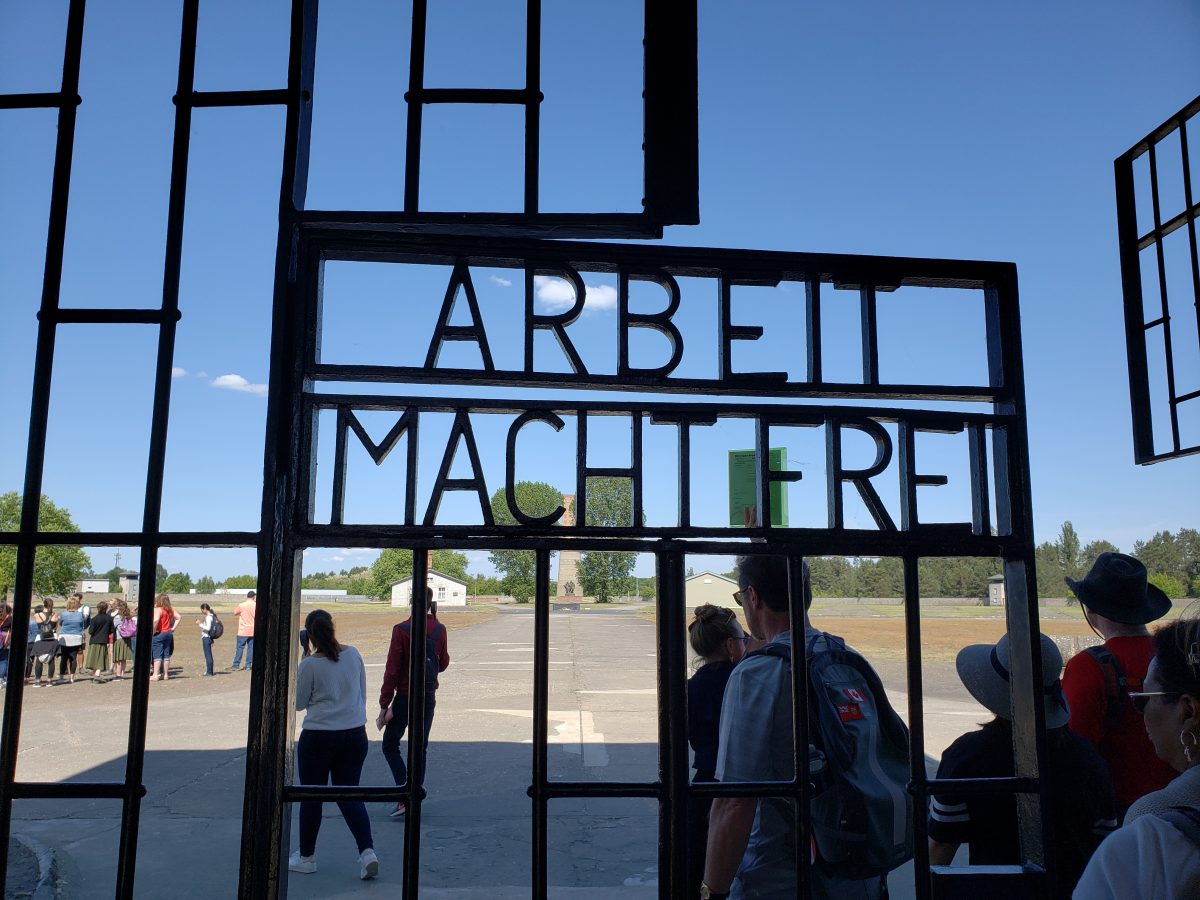 Some of the original buildings have been repurposed, with a plaque outlining their original use.  For instance, original buildings have been refurbished into dormitories for police training. The Sachsenhausen Monument, located in the middle of the memorial site, is dedicated to political prisoners who were forced to wear a red inverted triangle. All three sides of the monument are decorated with red inverted triangles, which excludes other categories of prisoners such as Jewish political prisoners (black or red facing down with yellow facing up), Romani males (brown), habitual criminals (green), homeless and work-shy—those with no permanent work (black), Jehovah’s Witness and those who refused military service (purple), homosexual men (pink).  These badges helped the guards assign tasks to the detainees. 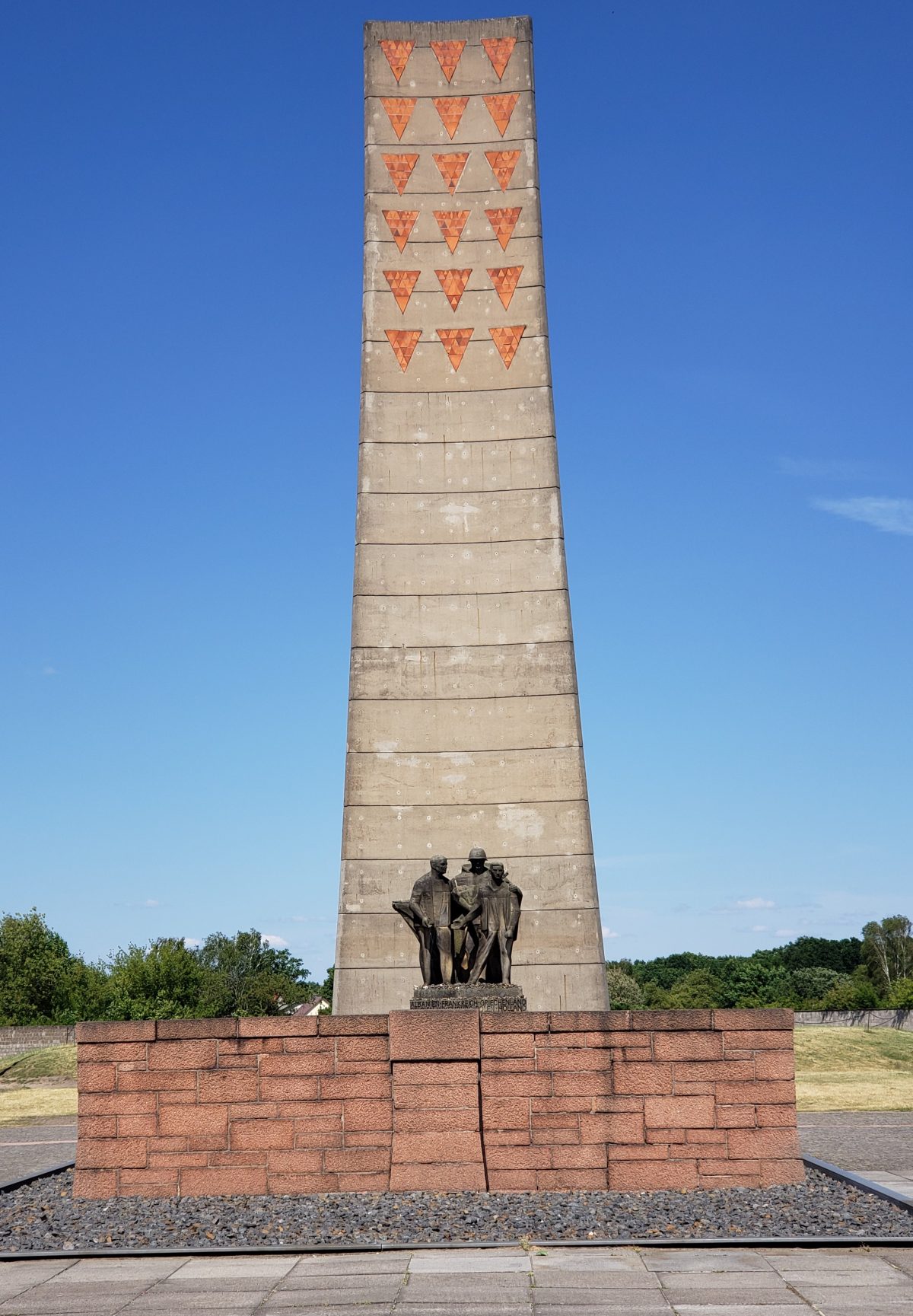 The barbed wire atop the 3-metre brick wall surrounding the camp is another poignant reminder of the death and suffering which occurred in Sachsenhausen. Just inside the brick wall is a gravel ‘neutral zone’. Any prisoner found in the neutral zone was executed. 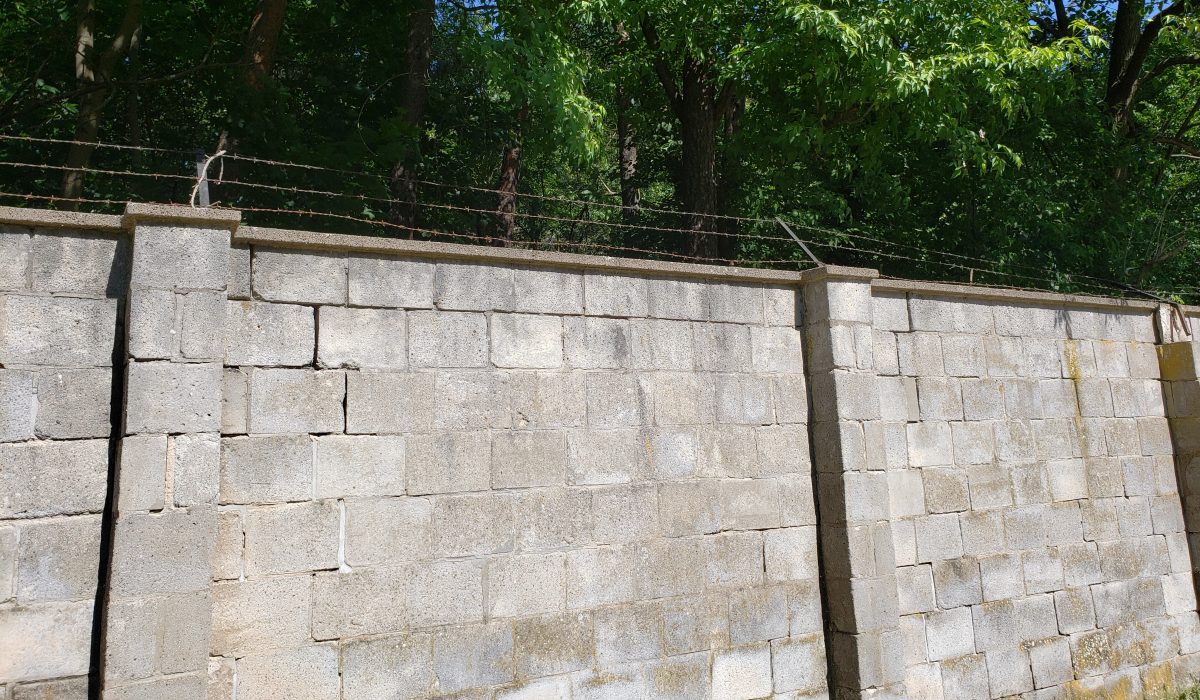 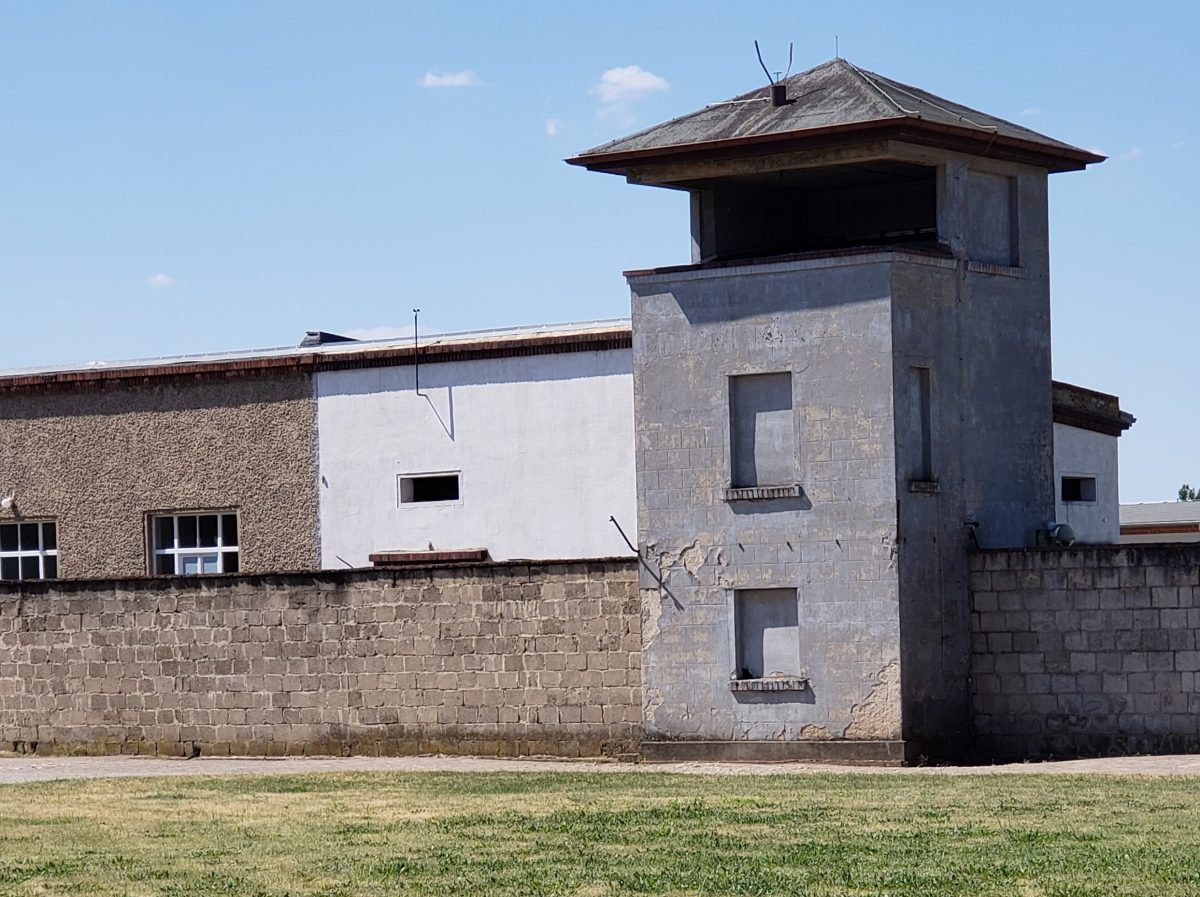 The guardhouse and watch tower stand as a stark reminder of the terror held over the prisoners.

Sleeping barracks were initially built to house 146 people per building.  At their peak, the barracks held 2-500 people.  Although many sleeping barracks have been torn down, a rectangular area marked by crushed stone stands to remind visitors of the sheer number of barracks at this location. Numerous watch towers faced the barracks. 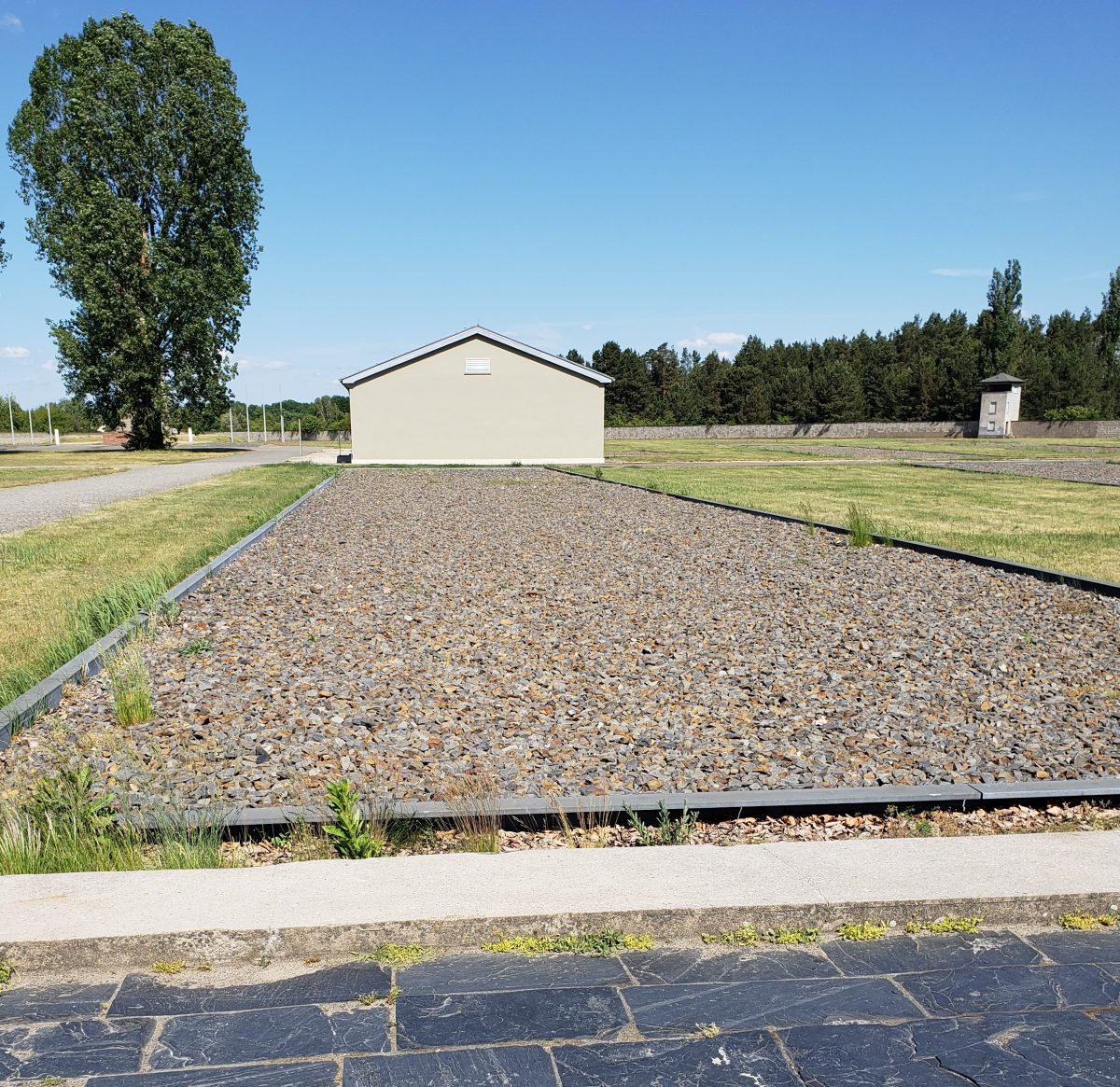 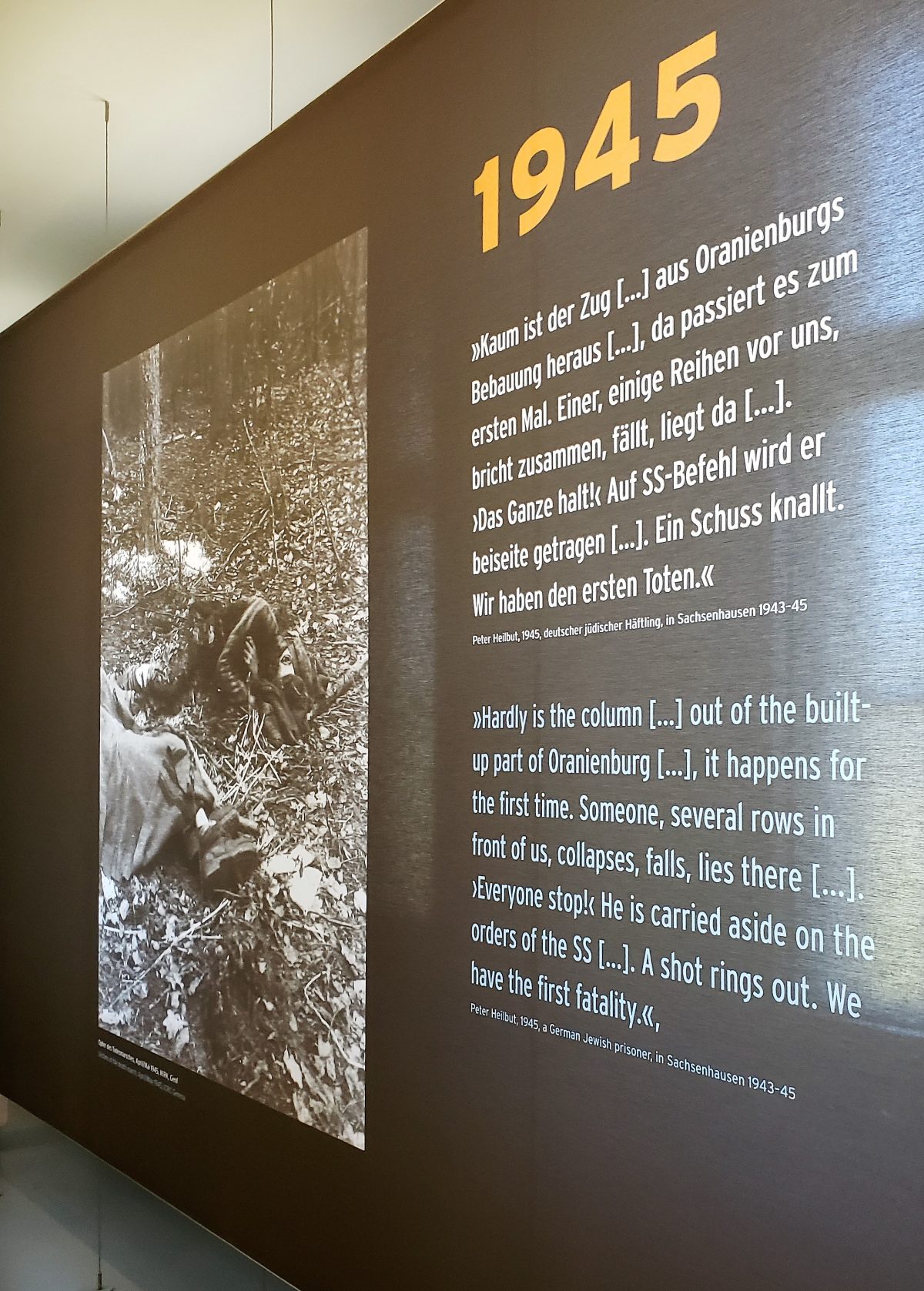 Through the voice of a prisoner

Sachsenhausen has an underground execution trench, known as Station ‘Z’, and the beginnings of a gas chamber.  The entrance gates are referred to as Station ‘A’.  The execution trench was known as Station ‘Z’ as it was the final exit. The execution trench and the gas chamber are located inside the industrial yard where factories were once located.  This area is separated from the prison enclosure by a brick wall. There is significant discrepancy on how many people were led into the gas chamber, as some reports note that it was just built before the liberation of the prisoners and others note that mustard gas was used. 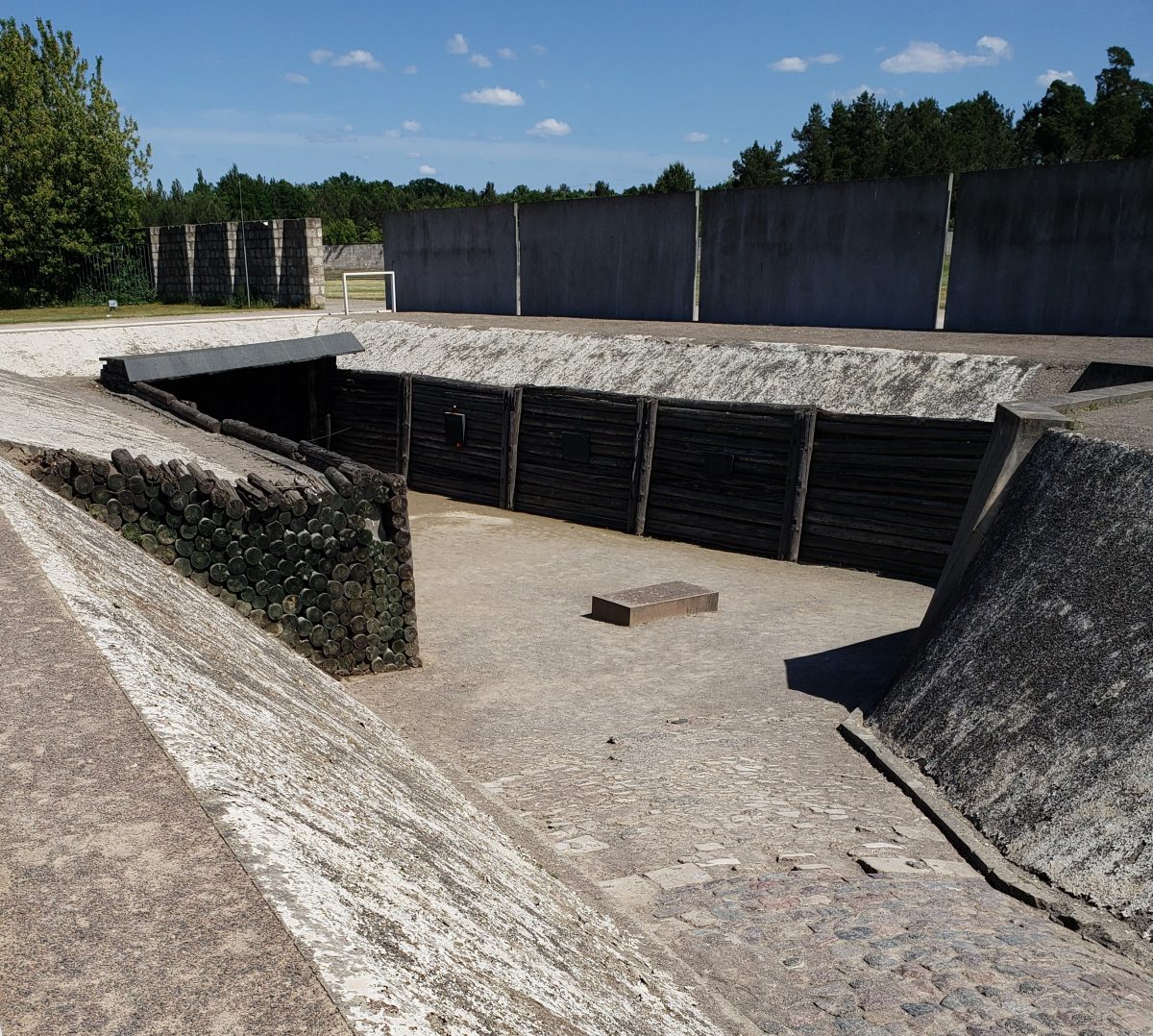 Another memorial stands in front of the former crematorium and execution site (Station Z).

Evidence of a gas chamber 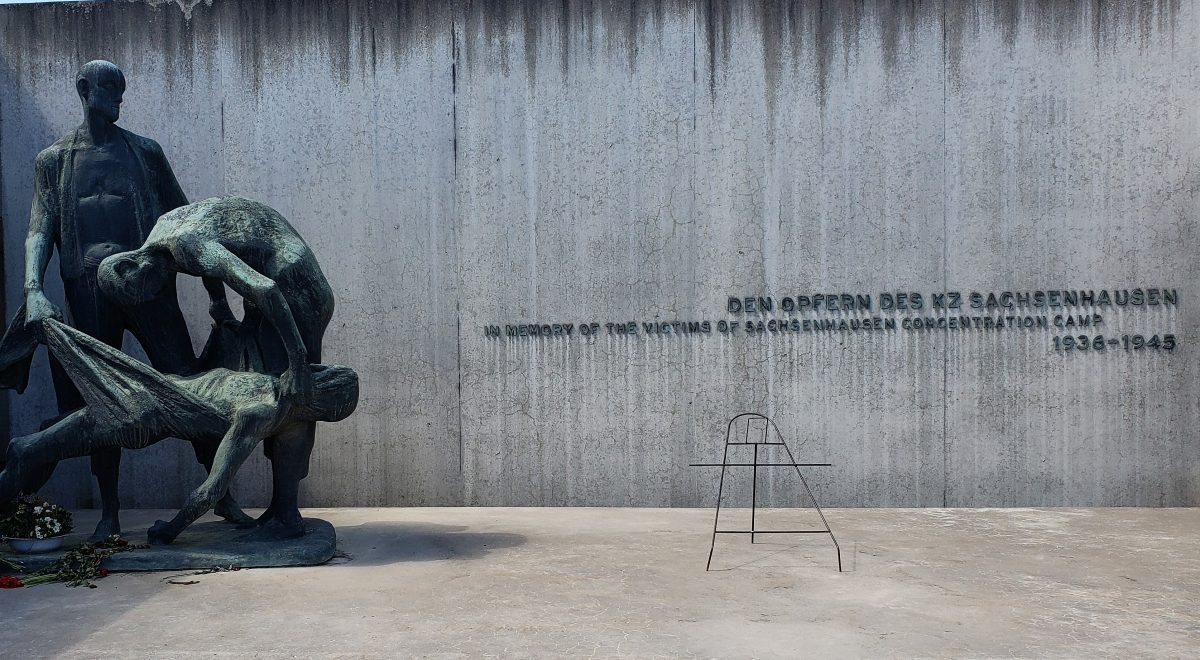 The numbers of men who died while in Sachsenhausen vary widely.  It is estimated that over 200,000 men died due to poor living or work conditions or were murdered. This exhibit puts a face to the brave men whose ashes are buried within the camp. 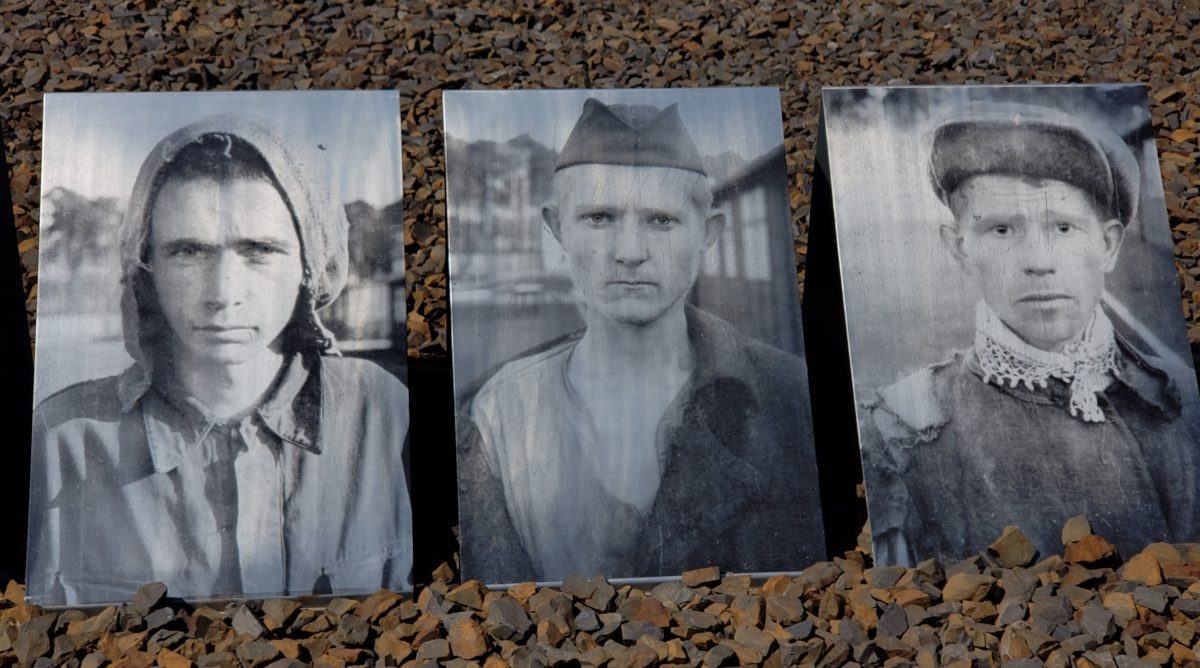 Seeing the faces of the men who perished brings home the reality of what occurred in this space. These men are someone’s brother, father, son, grandson, or uncle. The visit to Sachsenhausen is an experience that I will never forget. As a large group, we walked through the exhibitions and out-buildings in relative silence.  We read the words of prisoners, put context to stories or words that we might have read while in school.  More importantly, we learned about a horrific period of time when some of us may or may not have been alive. The experience affected each person differently and invited reflection. Some may have had relatives imprisoned, they may belong to a faith or belief that was targeted, they may have read stories that were brought to life.  The train ride back to Warnemunde was very quiet as we silently reflected on the experience we went through together.  I hesitated to post this story on a travel blog. There are no words that can describe the impact the visit to Sachsenhausen has had on me.  If this article inspires one person to make the trip, then I made the right decision. It was moving, emotional and memorable.

Things to Know Before You Go

How to Get There

Sachsenhausen is located in Oranienburg, roughly one hour by train and 40 minutes by road from central Berlin. To get there via public transit, take the metro (S-Bahn) to Oranienburg from downtown Berlin, then walk 20 minutes or take bus 804 to the memorial site.