Put the Great Barrier Reef on your bucket list! 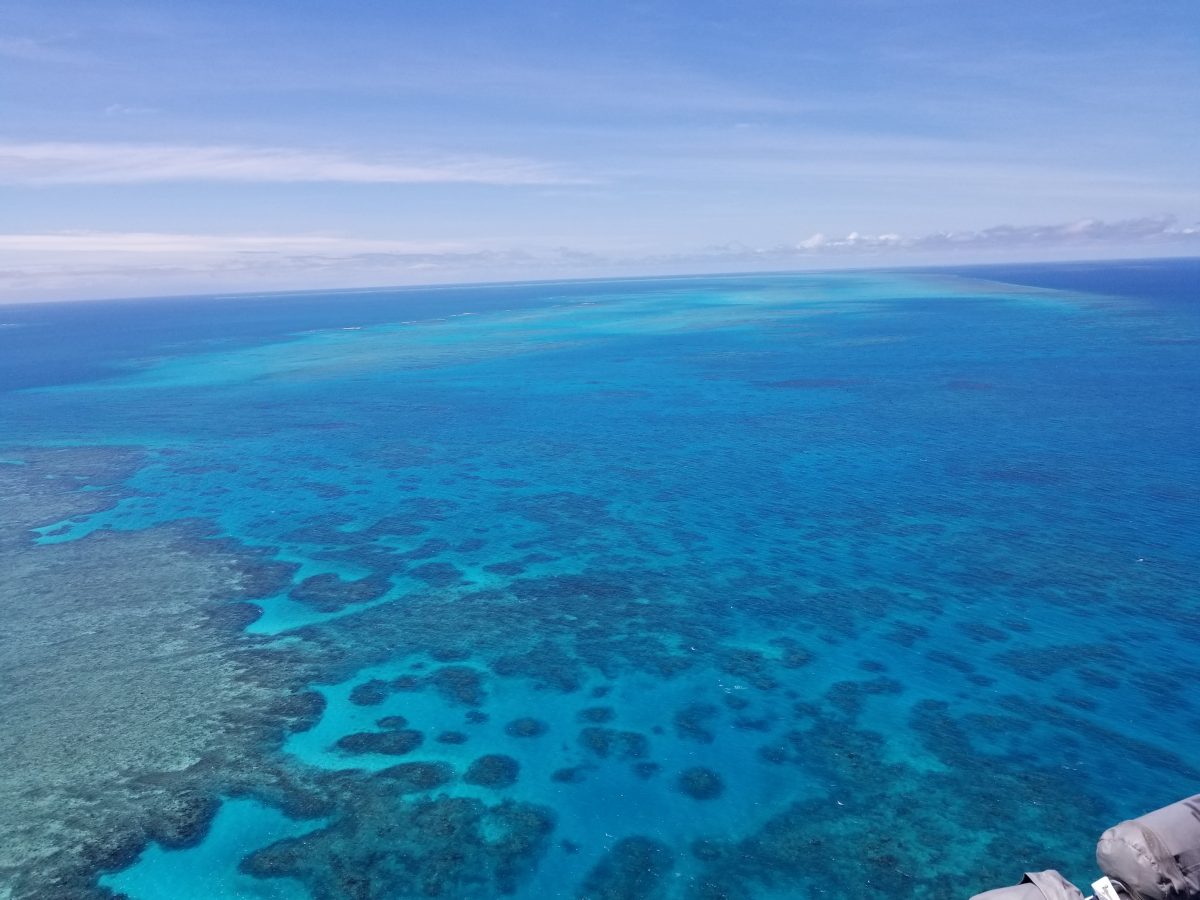 Have you ever been so excited to go on a trip that you could jump out of your skin? You count the days until you board the plane, and you research everything that you can find about your next destination?  The day finally arrives, and you are standing in your destination ready to see all it has to offer.  This is how I started my trip to the Great Barrier Reef.

It was a long plane ride from Canada (via Dallas-Fort Worth) to Sydney. One of the largest cities in Australia, Sydney is a vibrant city filled with tourist attractions. Visit the iconic Sydney Opera House, walk along Darling Harbour or climb the Sydney

Harbour Bridge if you dare! For more “off the beaten path” opportunities, visit The Rocks, a lively, yet laid-back artistic area filled with art galleries, weekend markets and great restaurants made for people-watching.  Visit Featherdale Wildlife Park where you have the privilege of up-close encounters with local wildlife, including kangaroos running free—but don’t cuddle the koalas as it is against the regulations of New South Wales.  No worries mate…you can stand next to then for that great photo op.  Try catching a wave at Bondi or Manly Beaches. There is plenty to do in and around this large, metropolitan city to keep you busy for days.

But I flew here for one purpose: The Great Barrier Reef. It was time to come face to face with the beautiful coral and countless species of fish.

After spending a few wonderful days exploring Sydney, we board our final flight to Cairns (pronounced Cannes by the locals).  The weather was perfect, the flight was smooth and three-hours later we arrived!  What struck me was the distance between various regions in Australia. In three-hours I can fly from Toronto to Florida, but this trip took us to north-east Queensland.  Cairns is commonly referred to as the gateway to the Great Barrier Reef.  My first impression was a ‘hippy’ town where locals work to live instead of living to work. Perhaps they have found that elusive work/life balance.

A long esplanade winds through the town which is lined with a wide-variety of restaurants offering local fare such as crocodile and kangaroo skewers, Italian and pub-style food, Asian-fusion, French, Middle Eastern and a few chain restaurants such as KFC and Baskin Robbins, both of which seem out of place in this tropical town. The Cairns esplanade is adjacent to a swimming lagoon and barbecue area with a wonderful walking path. The temperature hovers between 25֯ to 32֯, with hot, humid summers and milder winters.  The wet season runs from November to May so plan accordingly. 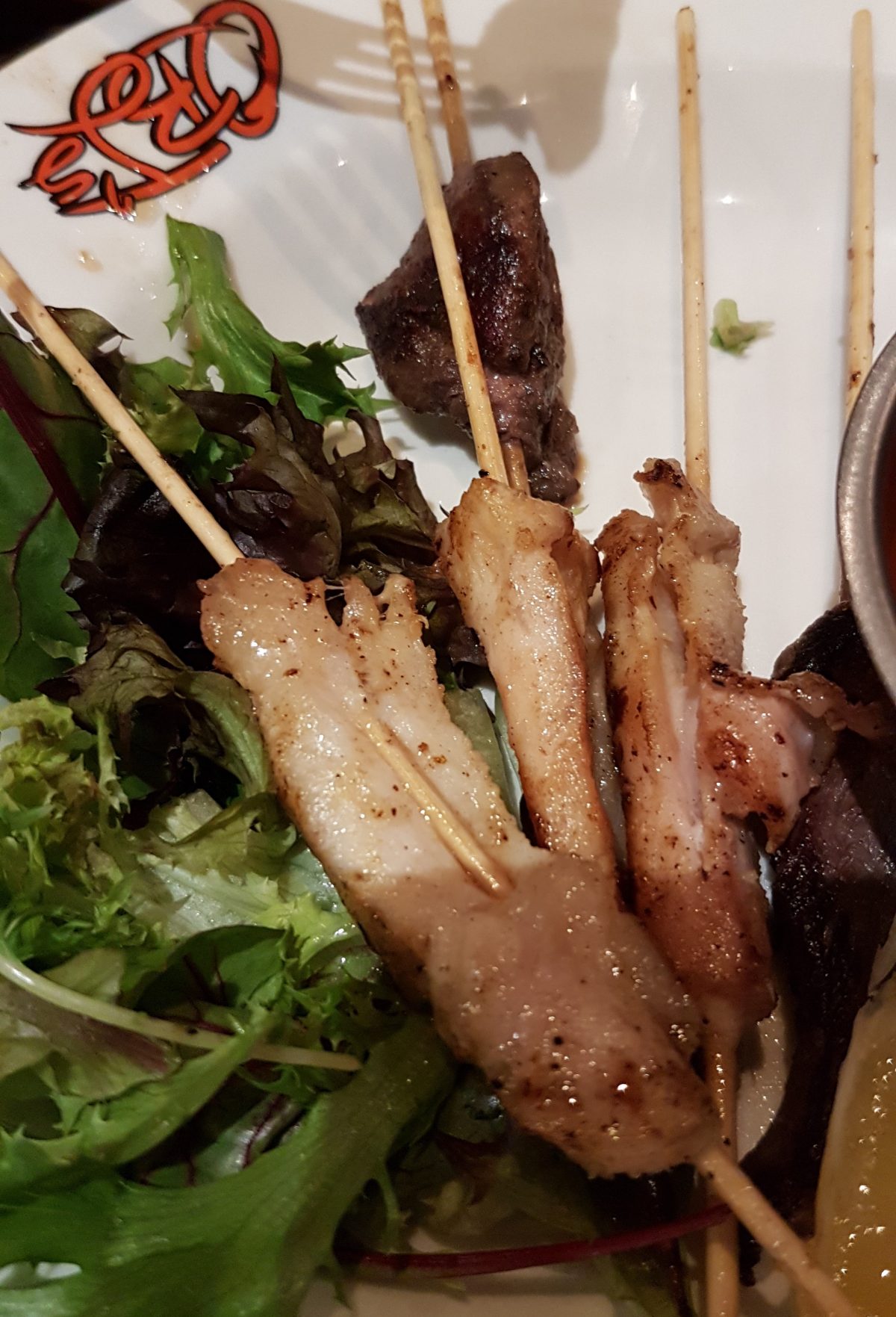 After doing all the touristy things in Sydney, we were instantly struck by the heat and the easy-going vibe offered up to visitors. The open-air cafés, the tropical flora and fauna allowed me to take a deep breath and let my shoulders fall away from my ears.

For those who are daring, visit the Cairns ZOOM and Wildlife dome, located at the top of the Reef Hotel & Casino. Try out the ropes obstacle course or the three ziplines, one of which zips you over Goliath, a four-metre long saltwater crocodile. 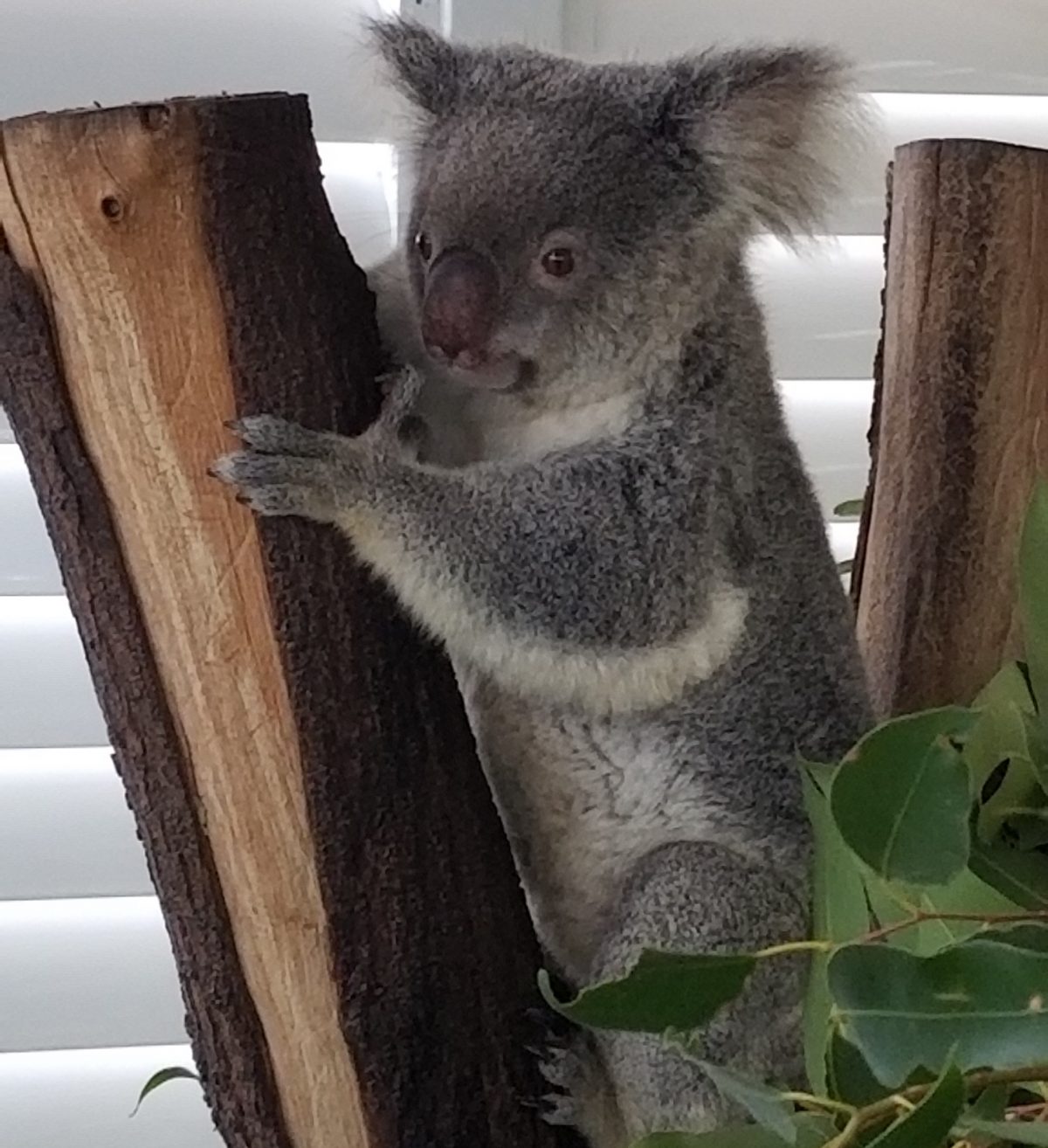 For the adventurous types, try the edge-walk around the outside of the casino’s domed roof.  It is acceptable to cuddle a koala in Queensland. These sleeping beauties are the most adorable creatures up close. The koala’s cuddling time with the public is limited as they are nocturnal animals and sleep up to 18 hours during the day. A handler pays close attention to, and limits, the cuddle time with these beautiful animals. An argument can be made to leave the animals in their wild habitat, but an equal argument can be made about the need to learn about koala’s first-hand, which includes the opportunity to hold one.  I have to say I am somewhat conflicted, but I did learn quite a bit from this experience.  The Queensland koala is listed as vulnerable on the threatened species list.  Some of the threats include cats and dogs, deforestation, bush fires and a loss of their natural habitat due to land development. Koalas cannot see very well at night and use their hearing to determine if predators are nearby.  The gestational period for a koala is only 35 days.  Baby koalas are called ‘joeys’.  Joeys are about the size of a jellybean at birth. They are blind, have no hair and crawl into their mother’s ouch for the next six-eight months.  Interesting stuff!

I highly suggest renting a car and driving north along the Captain Cook Highway. An easy drive from Cairns is Port Douglas, the middle point between Cairns and Daintree National Park, a natural rainforest. Stroll along Four-Mile Beach or take a boat ride in search of crocodiles!  Tuck into a great meal or take a tour of the outer parts of the Reef. If you find yourself in Port Douglas on a Sunday, try a coconut or curry lunch from the Sunday market.  On the way to Port Douglas, stop at Rex Lookout. The view of the water back towards Cairns is striking. If you are lucky, you will catch hang-gliders or tandem gliders jumping from this point. Rex Lookout is located along a winding stretch of road to watch out for traffic jams or jay-walking tourists.

The time has come to become up close and personal with the Great Barrier Reef and I couldn’t be more excited. There are many ways to view the Reef—private boat, tour companies, helicopter, planes, glass bottom boats, snorkeling or diving.  Many tour operators offer day trips to popular Fitzroy Island or Green Island. Tour companies cater to those who are strong swimmers and those who are not.  Be honest with your own capabilities to make the most of your experience. We chose a special way to celebrate and make memories of this opportunity. 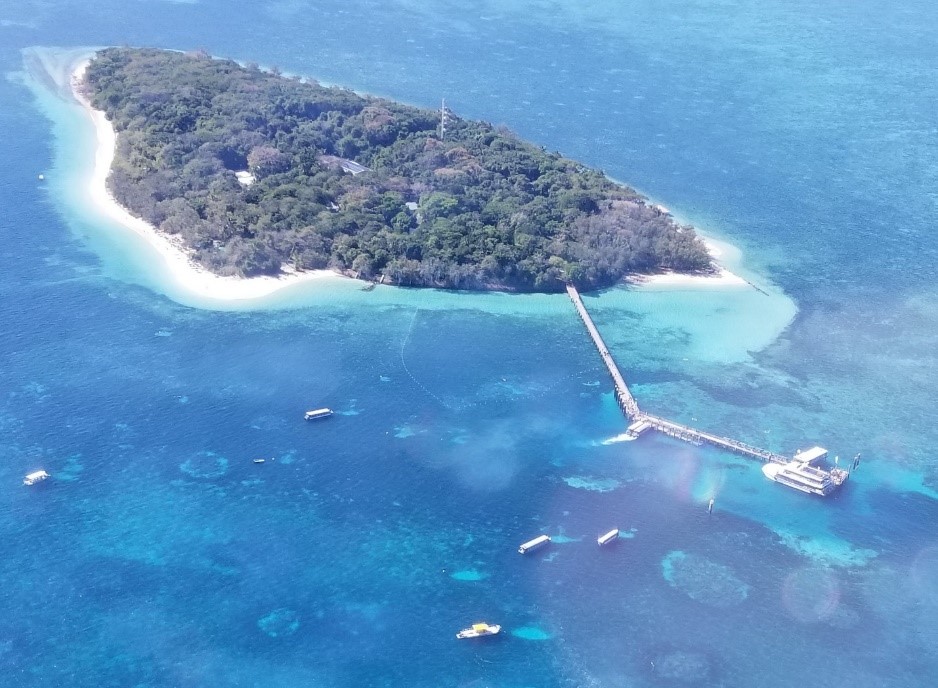 The Great Barrier Reef is one of the seven wonders of the natural world. It is a 2,300 km long ecosystem and a UNESCO world heritage site. In order to have a good understanding of the extent of the reef and some of the challenges it is facing, we took a helicopter ride to a sand cay in the Coral Sea to enjoy snorkeling and to have some one-one -one time with the pilot, a resident Aussie, who has watched the destruction of the reef over the years.  We hired HeliTours North QLD and were not disappointed. The views from the air over the reef are breathtaking, and the incredible beauty of the Coral Sea is second only to what lies beneath it.

There is no rhyme nor reason to the pattern of the coral beneath the clear, turquoise water. It is simply mesmerizing. I was surprised that we did not see many tour/private boats during our fly-over, but we did leave at 7am before most visitors were out and about.

The sandy cay we landed on, which is about 100 feet long by 50 feet wide, is accessible only by helicopter. It can be accessed one a week for up to two hours at a time by one helicopter. If the cay is occupied, the next pilot has to move on, generally to Port Douglas and the outer reef area. This regulation ensures the longevity of the cay and one that we respected. We were also the first to arrive which afforded us the privacy we were looking for.

As soon as we landed, out came the snorkelling gear and into the water we went. This is where our education begins. The water on one side of the cay was choppy and difficult to snorkel, while the other side was calm and inviting. We held on as long as we could in the choppy water as the coral and fish with this degree of beauty were creatures we had only seen in books and movies. With the sheer beauty and colour, I had to remember to breath. The coral swayed with the current while hundreds of fish swam around us as if we were not there. I have snorkelled many times, mainly in the Caribbean, but I knew this was special. From the stunning royal blue Surgeon Fish to the vibrant yellow Butterfly Fish, it felt like we were guests in a large aquarium.  We tried to still our bodies while we went on a journey akin to ‘Finding Nemo’ when we finally came across a school of Clown Fish, with their beautiful orange bodies and white 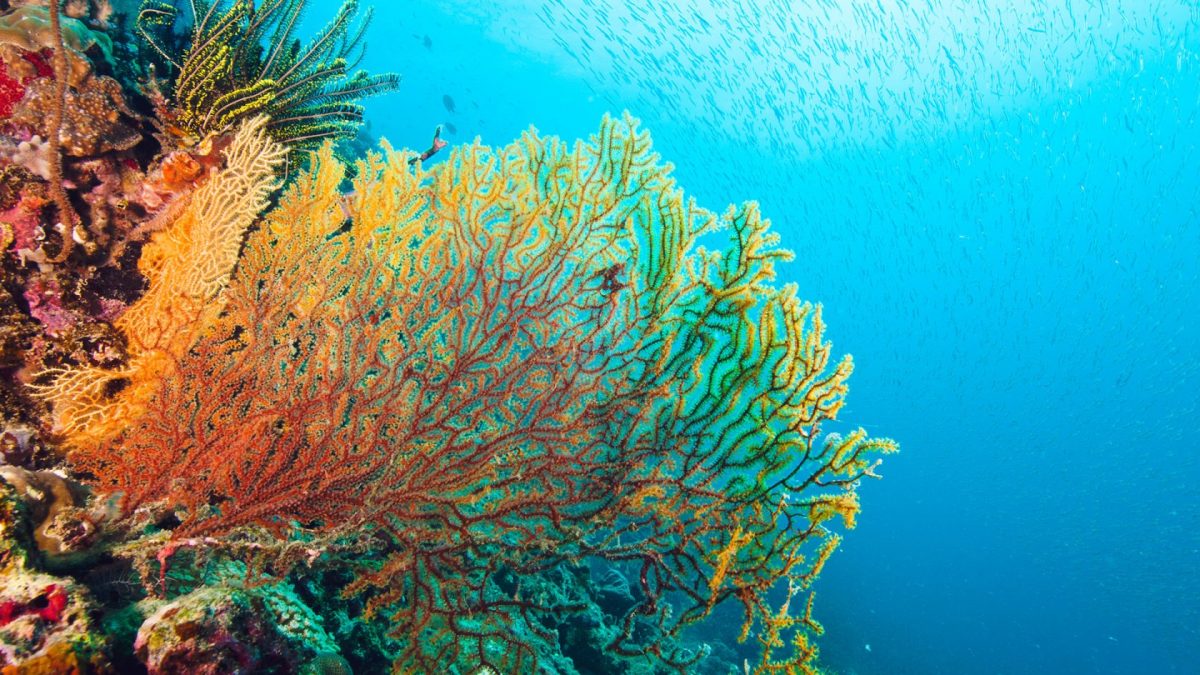 The vibrant colours of coral that make up the Reef create a rainbow unlike any you have witnessed before. It has to be seen up close to be fully appreciated.  Over 600 types of hard and soft coral make up the Reef. To watch them sway in harmony with the current is breathtaking. While hard coral forms the building blocks for the Reef, the soft coral acts as a safe home or hideout for the fish, due to their ability to camouflage themselves among the rainbow of colours. After fighting the waves and current until I could no more, we decided to try the other side of the cay which was easier to navigate. As soon as we set out to snorkel the other side, it was obvious the Reef was in trouble.  I was familiar with coral bleaching and the impact on its inhabitfish, turtles, sharks and stingrays—but it was very difficult to see the impact of two years of bleaching up close and personal.

Where one side of the cay was alive, colourful and full of fish, the other was completely white, with dried up coral pieces and an obvious lack of sea life. The Reef is an integral part of the fishing industry, tourism and local employment. Many blame global warming and the increase in water temperature for the continued coral bleaching, which extended from 2016 into 2017 compounding the issue.  The good news is the Australian government has put together “The Reef 2050’ plan, which is an effort the ensure the sustainability of the Reef for years to come.

While difficult to see the impact of bleaching on the reef, we are very fortunate to have the opportunity to visit the reef and see its glory in such an intimate setting. The warm, crystal-clear blue water and the beauty of the existing coral and sea creatures is a memory that will remain with us for years to come. It has also created a significant interest in following

how successful the scientists will be in ensuring the sustainability of the reef.

Australia holds many secrets, from the difference in climate from north to south and east to west, from tourist sites in major cities to natural beauty along its coastlines. It is a place of wonder and intrigue. What I know for sure is it is worth the time and money to explore the uniqueness of all it has to offer and I am sure that it will leave you wanting more.