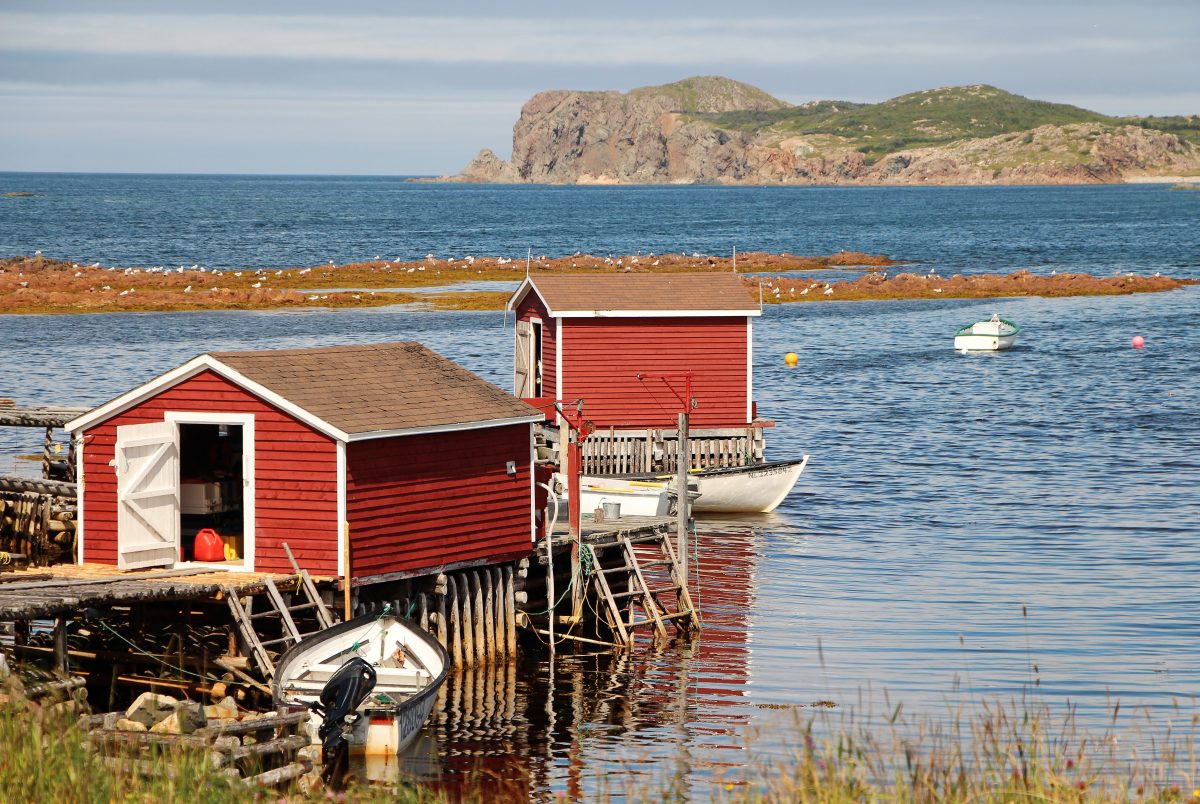 Sit back, close your eyes, and think about your favourite vacation destination.  Was it some far-flung exotic location that you longed to visit?  Was it a vacation with the family at a fun-filled resort?  How about a cruise to visit many countries?

I found myself doing this lately, sorting through my trips and reliving some of the amazing experiences.  When it came down to putting a pin on the map, it was hands-down a week-long trip to Twillingate, Newfoundland! 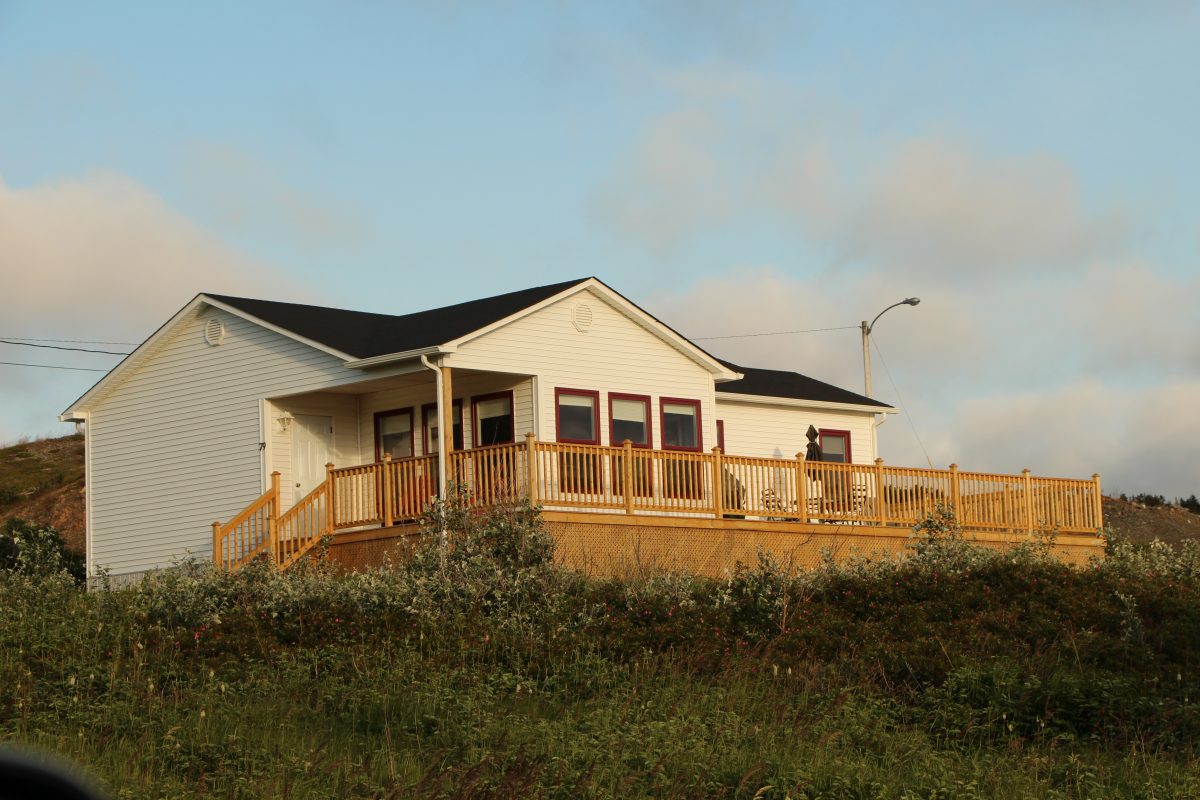 We rented a cottage through Airbnb and it turned out to be an amazing little two-bedroom house with every amenity we needed.  The house had a wraparound porch and was perched on a rock facing the Atlantic Ocean.  We actually checked the address a couple of times as we didn’t expect something quite as nice compared to the price.  Maybe someone left their door open by accident?  In short, we scored big time!

Our visit fell during the Fish, Fun and Folk Festival and our home-away-from-home was located across the street from the George Hawkins Arena where community feasts and dances were scheduled for the week!  We enjoyed a few home-cooked meals and sat at one long communal table, shoulder-to-shoulder with the locals. It was hard not to wonder if their accent was extra thick for us mainlanders or we really did have that hard of a time understanding.  Either way, it was the source of many laughs! 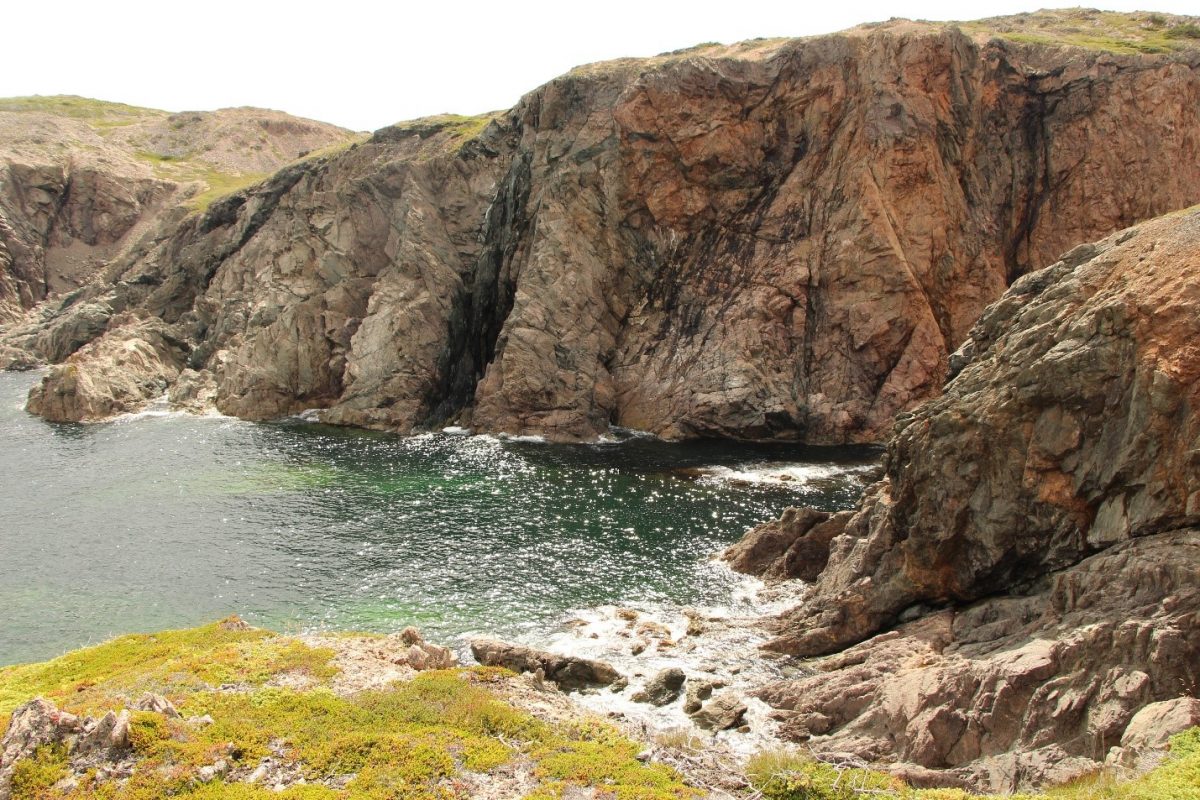 Twillingate is located on Notre Dame Bay, in the north-eastern part of Newfoundland.  The weather is as unpredictable as the people you will meet.  Raining?  No problem! Wait five minutes before the sun comes out?  Sunny?  Hang on until the fog rolls in.  Windy? Hang on to your hat until it blows through.  While you are waiting, take time to look around.  There are no traffic jams, lineups, or smog.  It is just clean, fresh air with none of the big-city pollution wrapped around the town.  The rugged coastline will draw you to its edge and the natural beauty of the landscape will leave you wanting more.

To fully appreciate the beauty of Twillingate, strap on your hiking shoes and follow the signs for coastal hiking.  Twillingate offers some fantastic marked hiking trails. 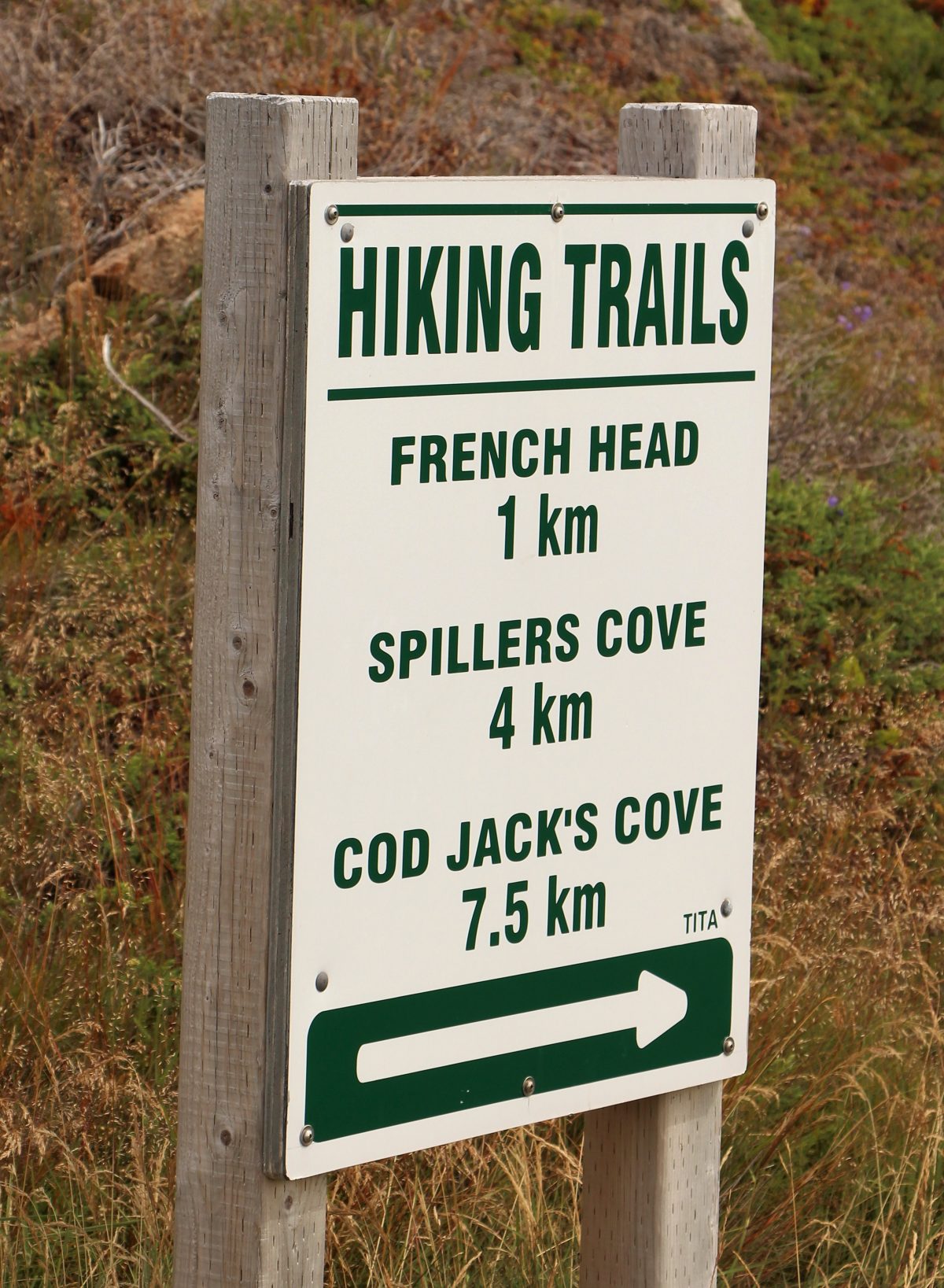 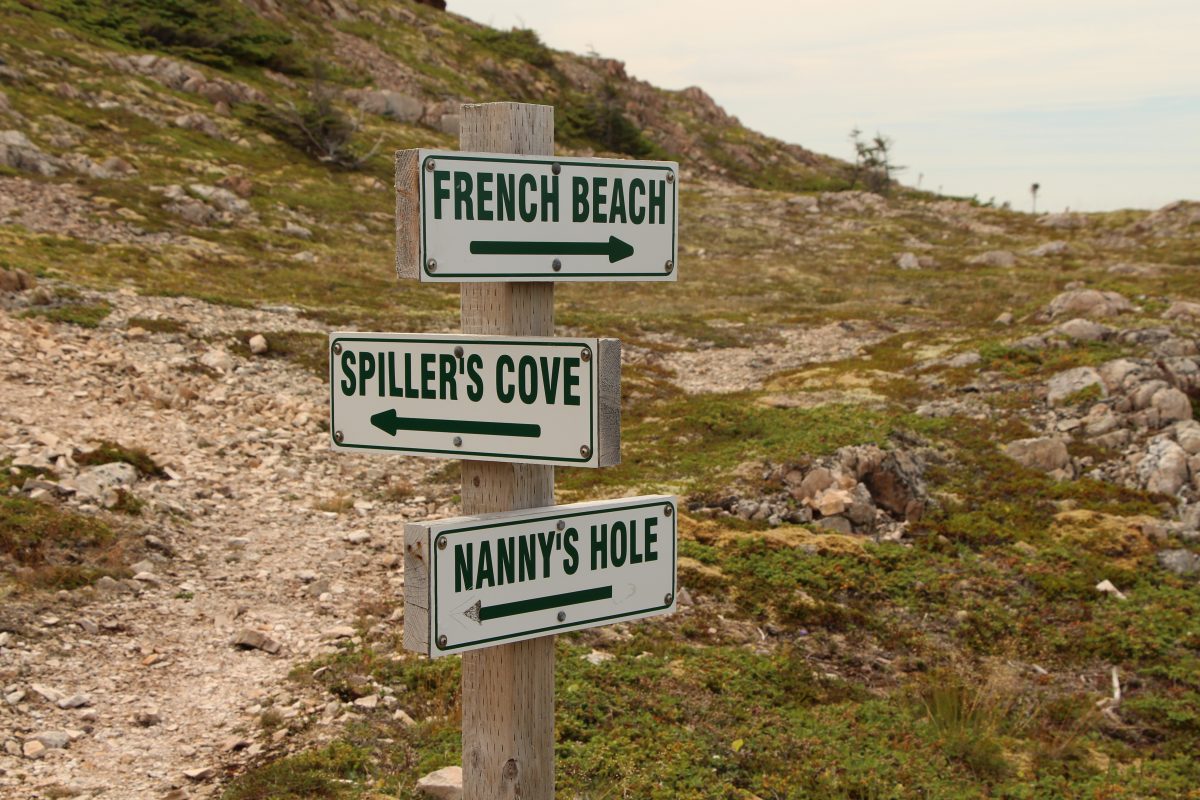 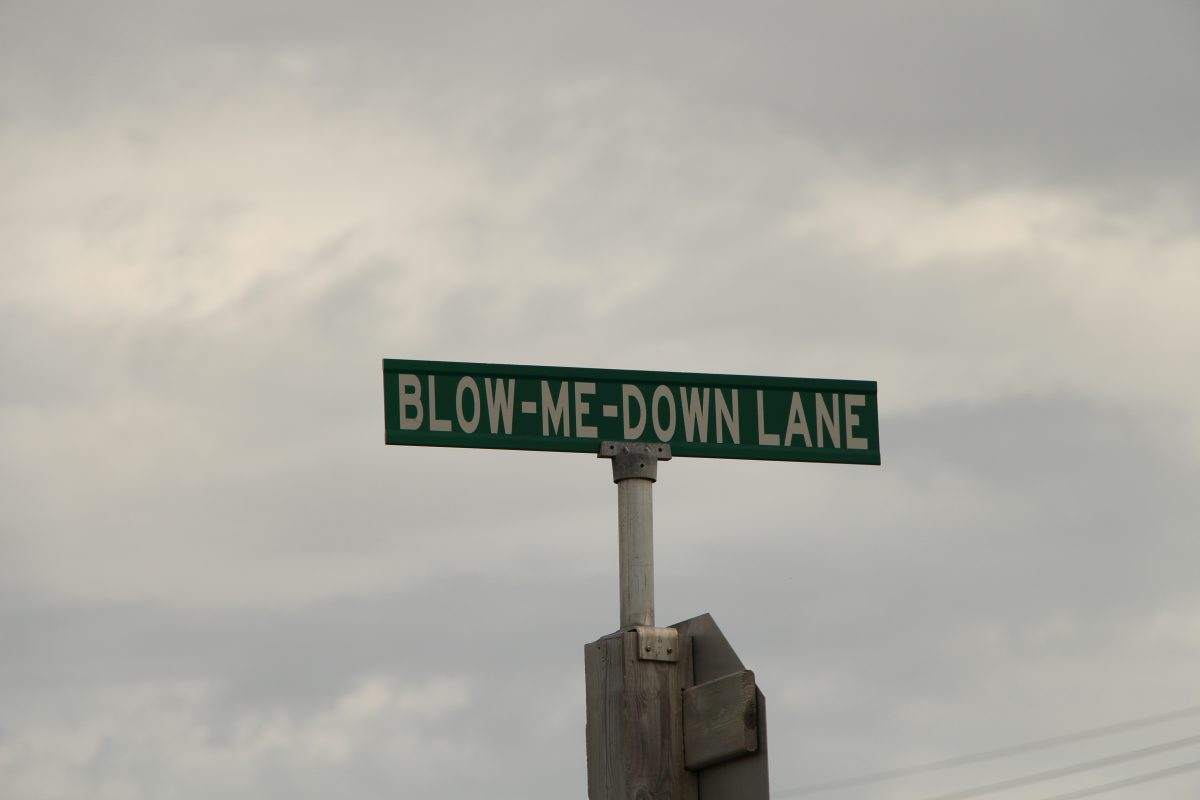 You have to question (or giggle at) some of the names no matter how old you are.

The trails take you along the coastline to the edge of cliffs and up to the top of bluffs for spectacular ocean views.   There are several routes to take depending on what you are looking for and your skill set. You will hike past rugged coastlines, root cellars, walk along beaches, past small family-run museums housed in brightly coloured shacks, and find hidden lighthouses.  One of the routes is wheelchair accessible. 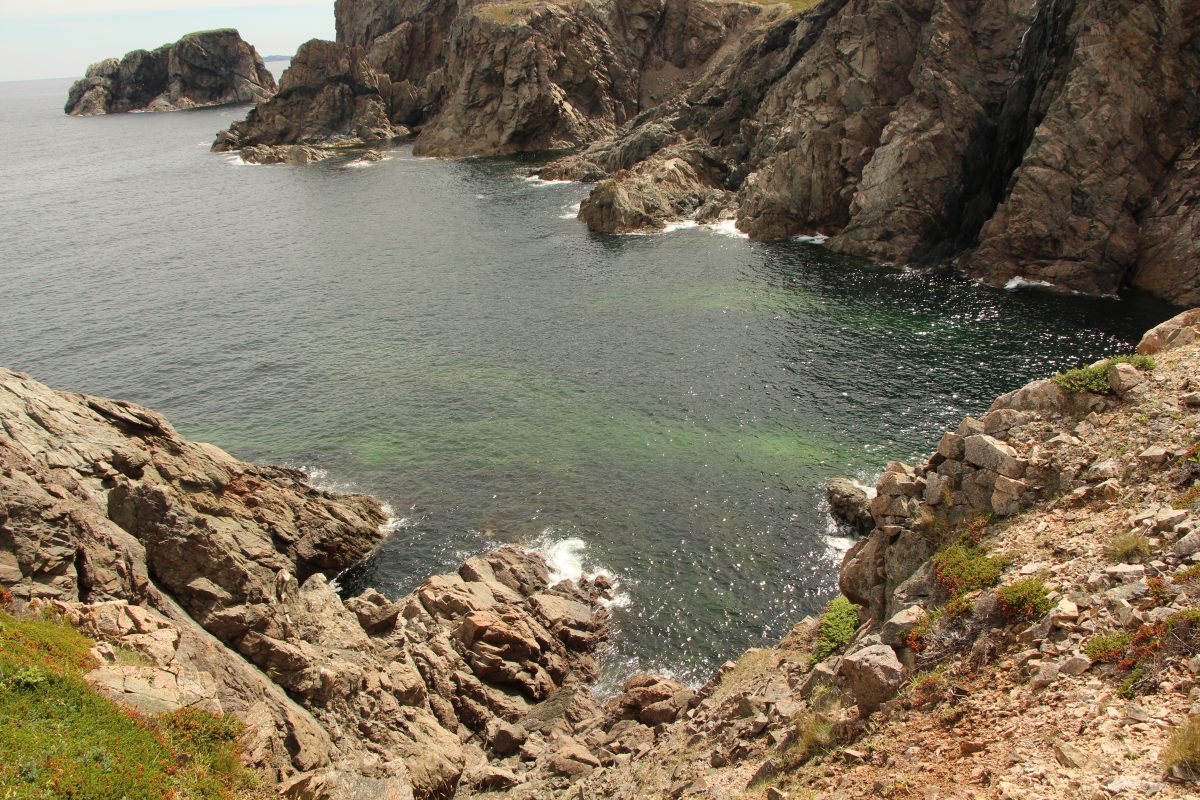 You will continue along cliffs overlooking crashing waves on the shore far beneath you. You will experience sea stacks, tall rock formations that tower above the water below. Osprey and eagles will fly by for that extra bit of awesome. Take a minute to close your eyes and listen to the sounds of the waves breaking, the wind whistling, and nature at its best. 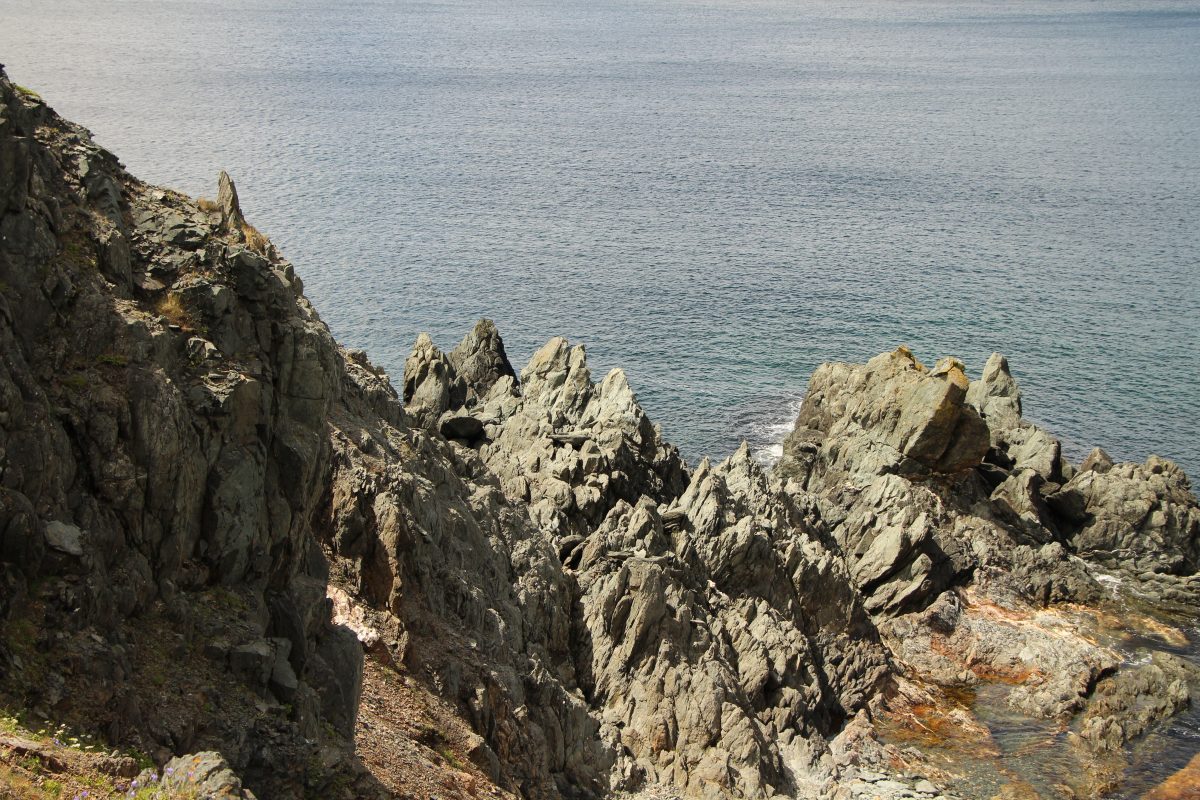 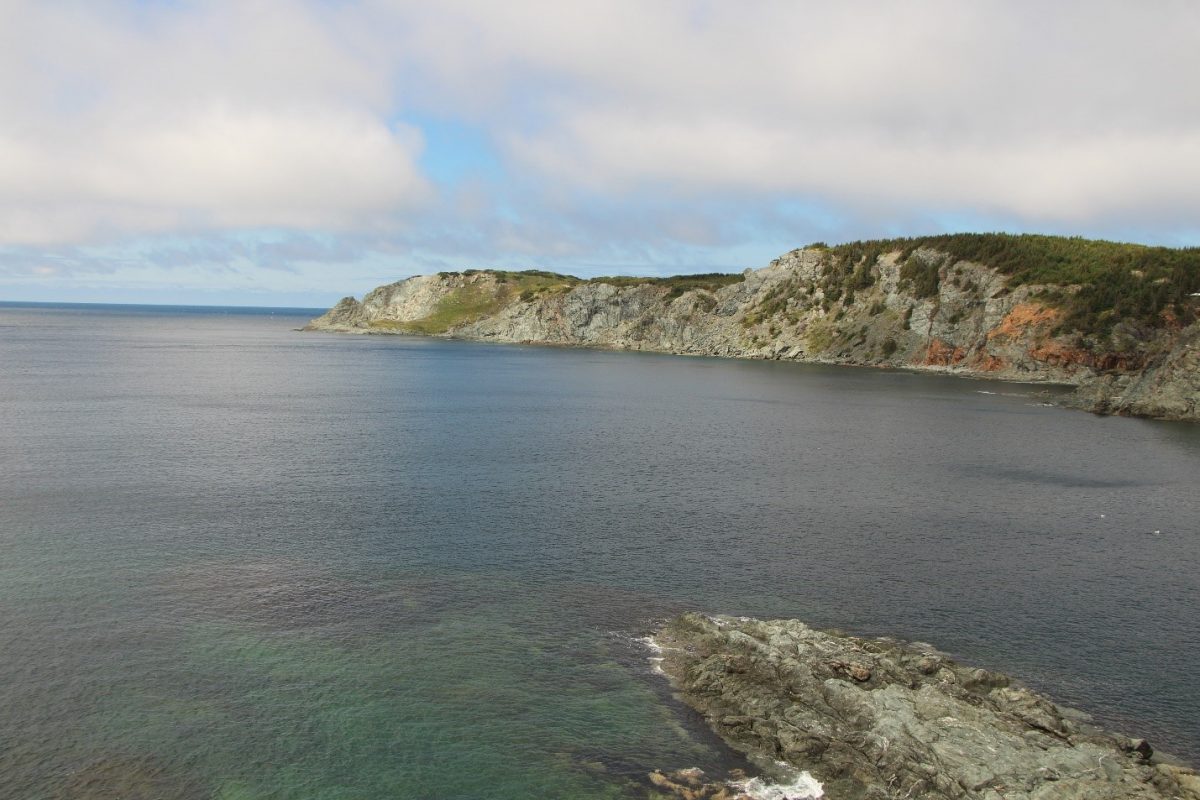 Most of the trails are rocky, and some can be deceptively steep, so choose your trail well.  Either way, be prepared to be amazed! 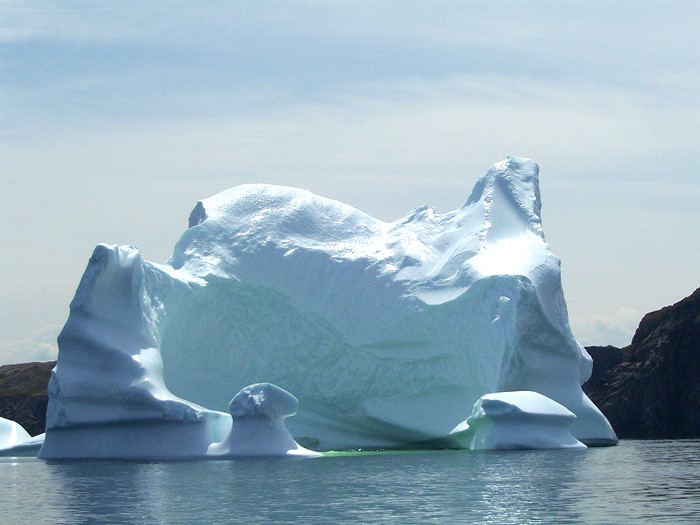 Twillingate is also known as Iceberg Alley, as massive pieces of ice break free from glaciers in Greenland and migrate south in the spring.  We were in Twillingate in mid-summer, and although we did see one iceberg, I think most of it melted before it reached us, as it looked like a big ice cube.  Boats still took tourists out for an up-close and personal view and it was still a better view than a highway full of traffic jams on any day!  If you want to see the iceberg parade, plan your visit accordingly!

Speaking of beauty, make sure you schedule a whale-watching tour no matter how many times you have been on one. 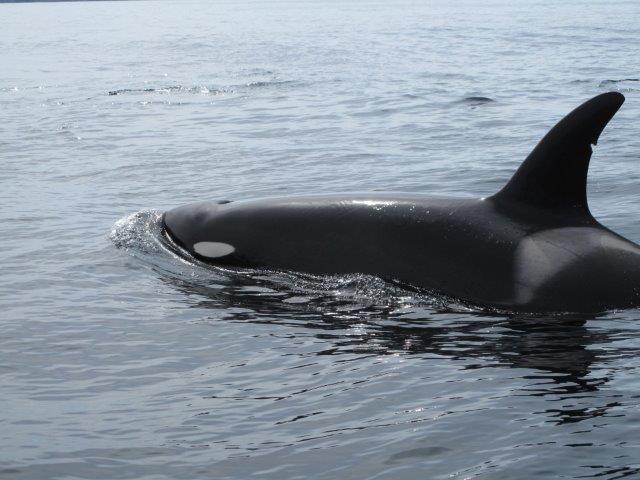 We decided to take a zodiac ride instead of a traditional tourist boat. It was a once in a lifetime experience.  We came across a pod of killer whales that put on quite the show! 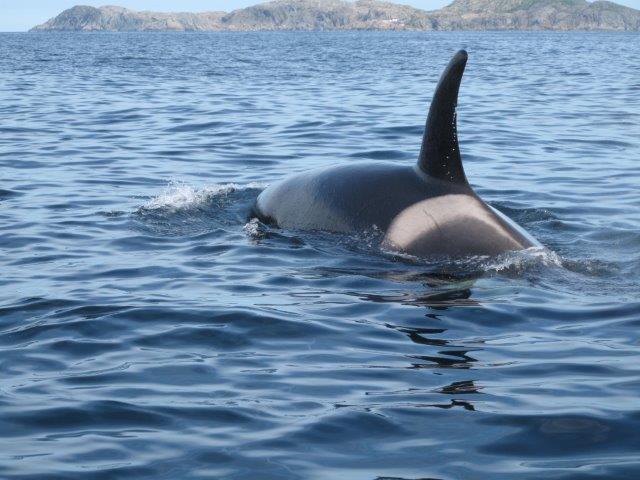 They jumped and danced in the air, creating waves so tall that you had to hang on tight as the zodiac swayed and bounced.  Afterwards, I wondered if the 20-foot zodiac was such a good idea as we could have been their next meal, but in the moment, it was as up close and personal as you can get with killer whales. 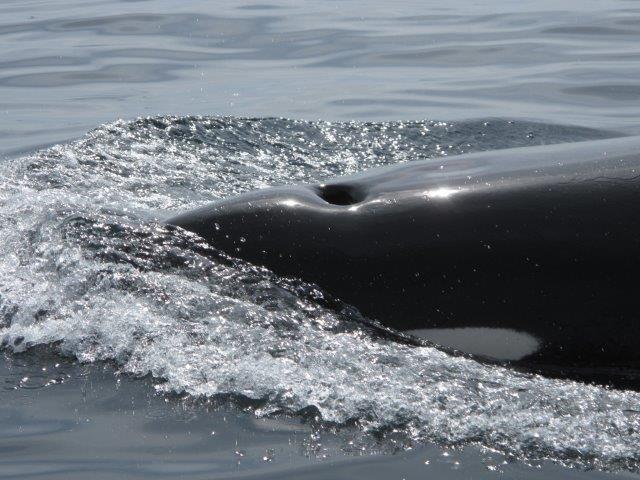 It felt like you could reach out and touch them as they swam alongside the boat, but the guide suggested (insisted?) we not do that.  The whales swam upside down under the boat and it looked like they were smiling as they played with us. 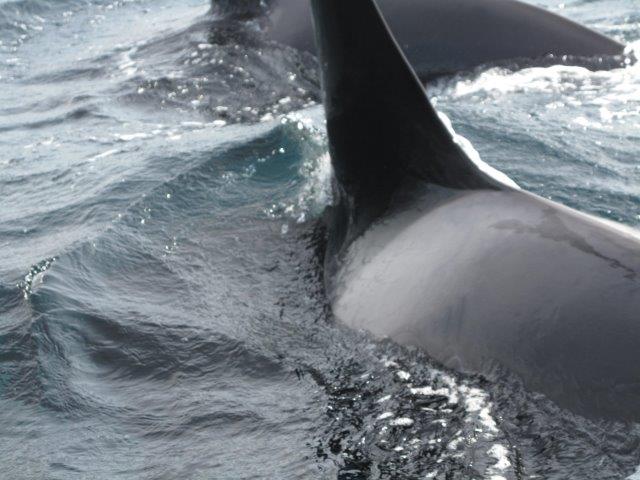 The show continued for a good half-hour before the whales decided they were bored with us and moved on.  We were left wondering what just happened. This was truly a moment I will never forget.

Let’s talk food.  Like seafood?  You will do just fine.  You don’t like seafood?  Get used to a lot of fish and chips! 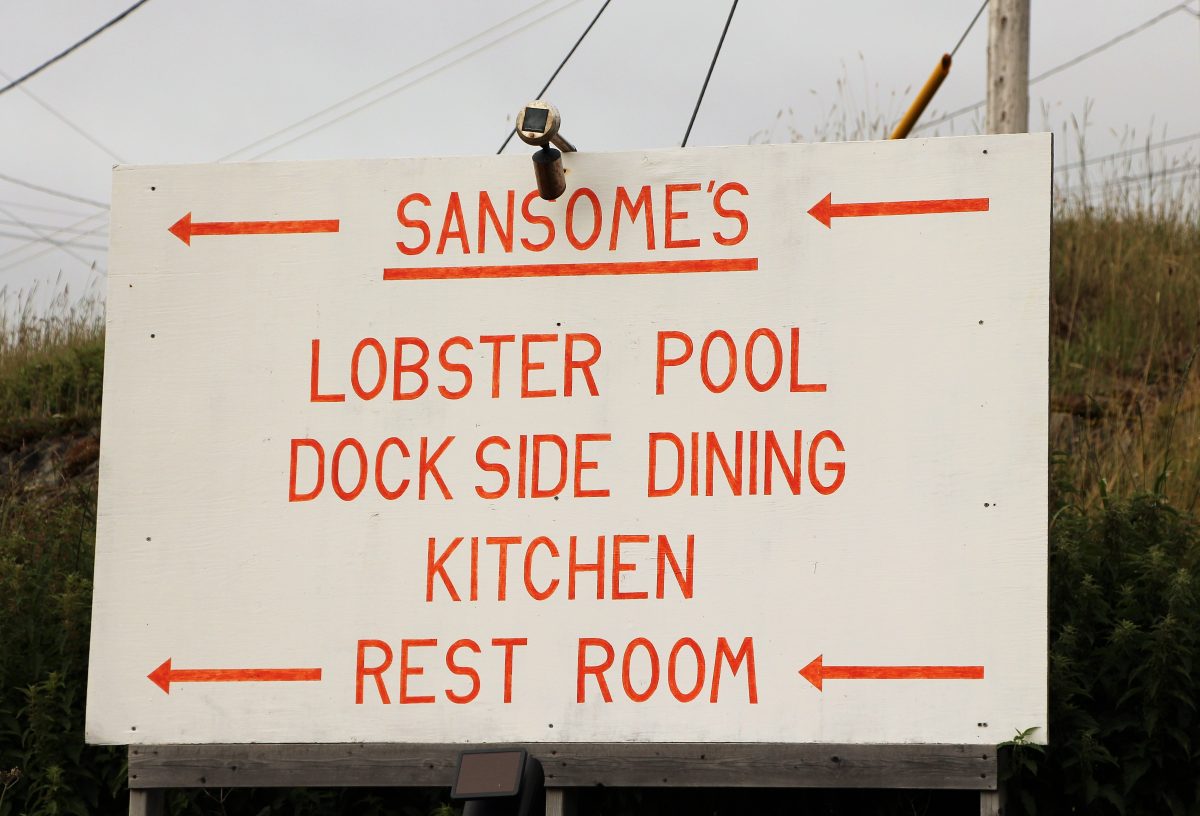 One of our favourite restaurants was Doyle Sansome’s and Sons Lobster Pool, located about 20 minutes from Twillingate in the small hamlet of Hillgrade. There was nothing fancy to see here, which is just what you want. 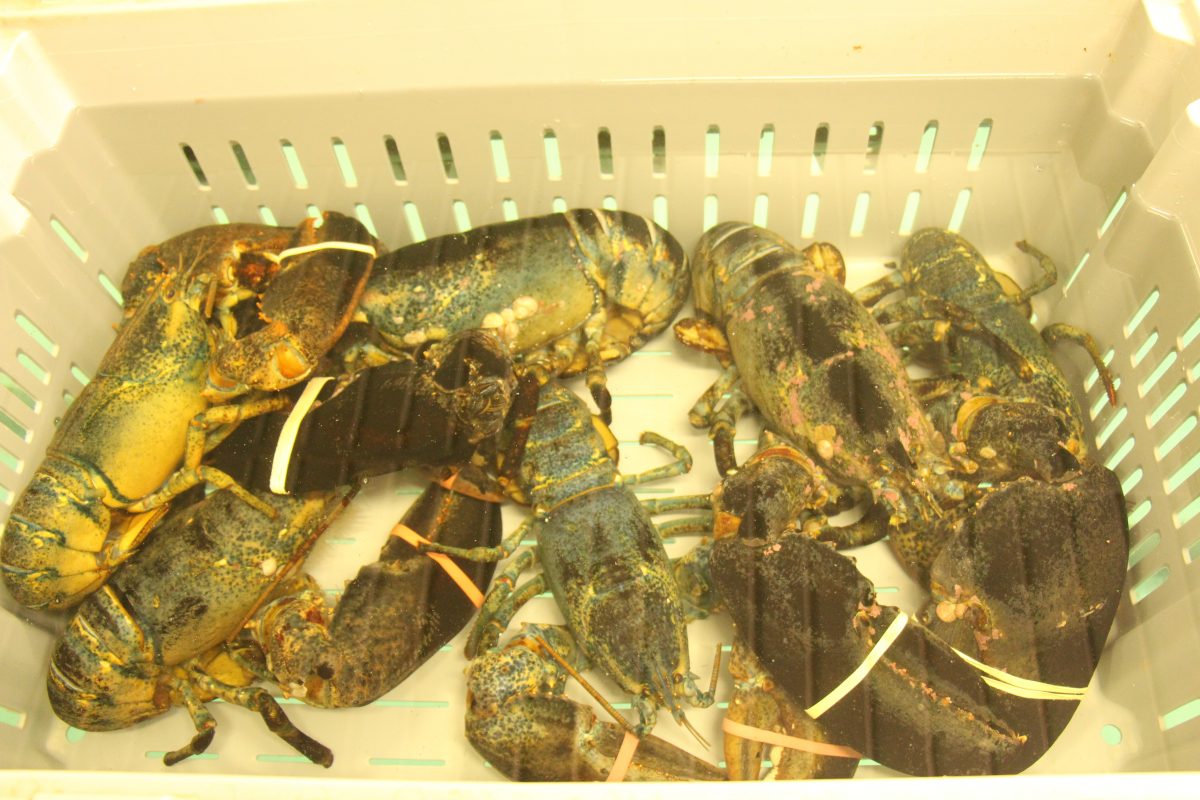 After selecting your lobster from the lobster pool (hard to select which one is about to take a hot bath…) you head into the restaurant which reminded me of being caught in a lobster trap! 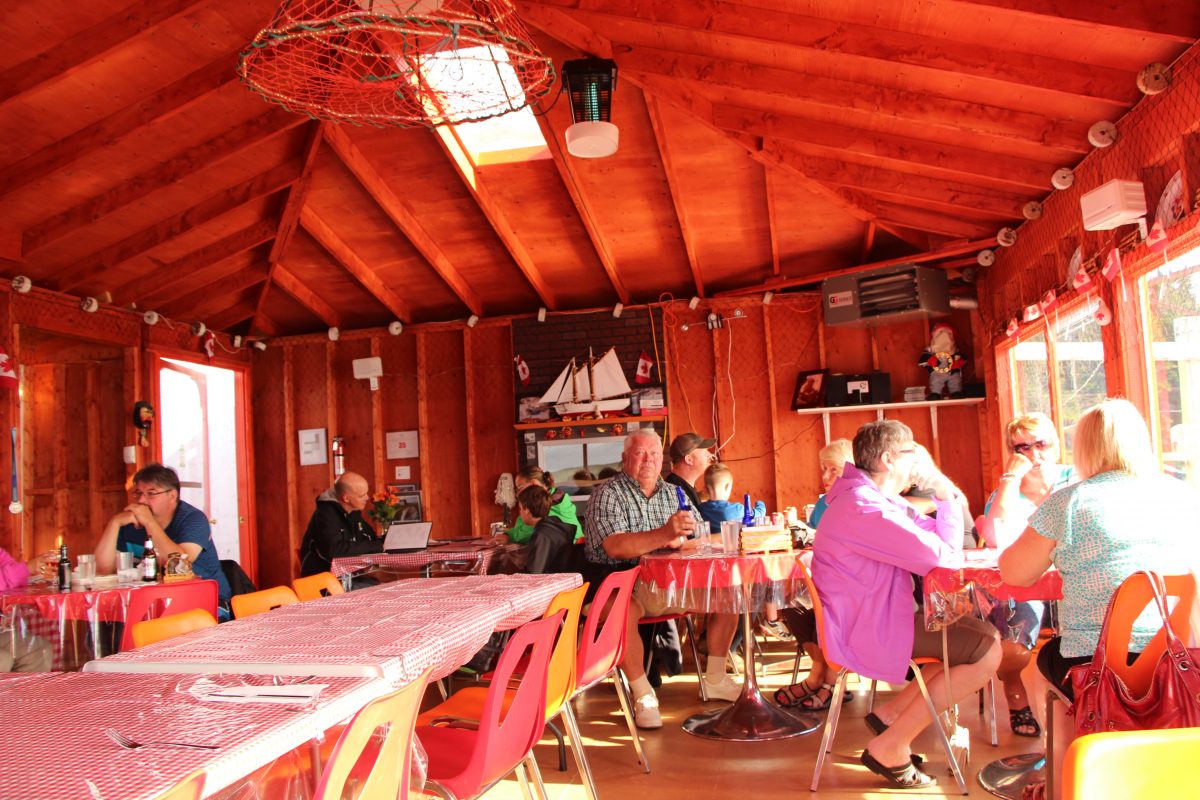 The plastic chairs and tablecloths were right out of a ‘50’s diner, but so necessary once you cracked your first claw and the juice sprayed everywhere!  Fishing nets adorned the ceiling, flyers put up by locals for upcoming events were taped to the wall and a sound system with wires hanging and poking into little holes in the wall rounded out the décor. This was a local hangout. Bottles of beer from the Quidi Vidi Brewery and Iceberg beer were the choice of the day. You want salad dressing for your side-salad?  Out came a bottle of Kraft’s French or Ranch.  This is a restaurant built on excellent food, great clientele and not on pretense. Their scallops were delicious, the seafood chowder had hunks of lobster, mussels and scallops in an ‘over-the-top’ seafood broth, and their fish and chips were so fresh that you wanted to write home about them. 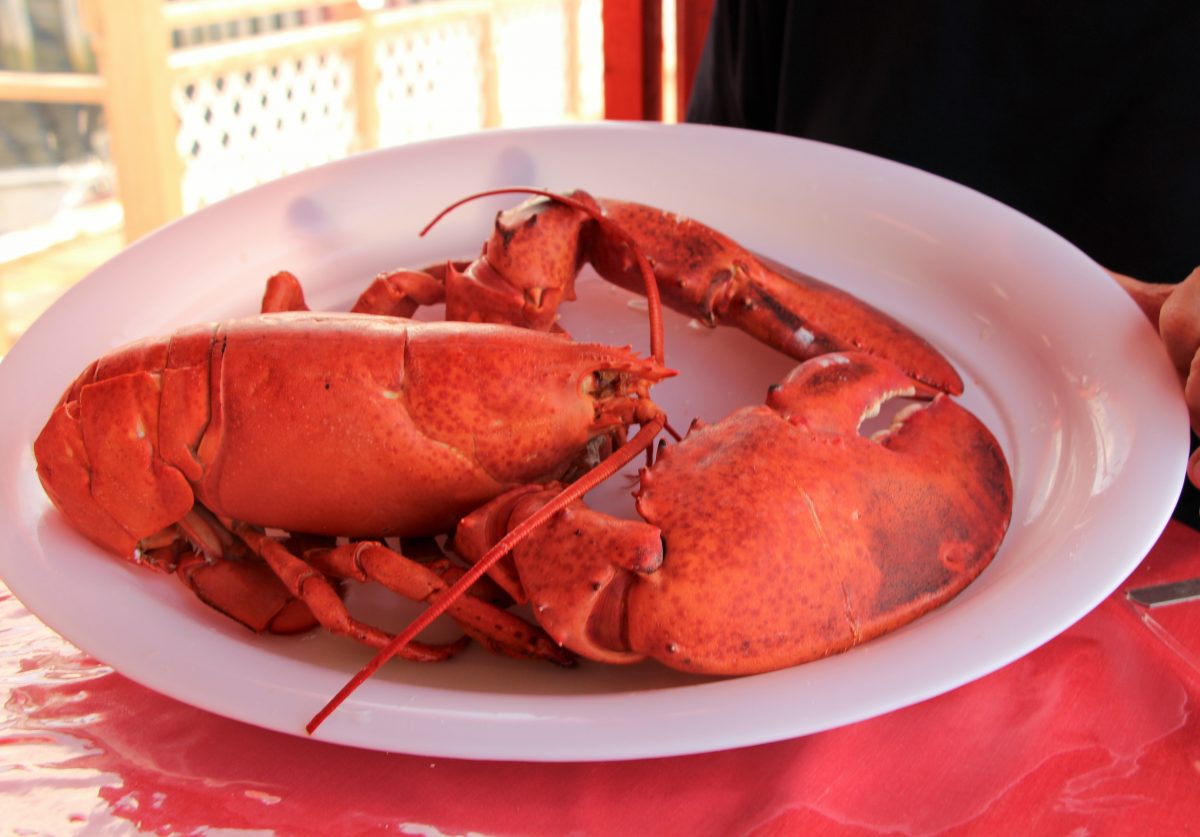 Lobster picks, forks, and crackers were passed back and forth, and lots of full bellies were left at the end of the meal.

Sansome’s also has a patio overlooking the harbour where you can watch the sun set and chow down on the freshest of seafood with your local craft beer.  It doesn’t get any better! 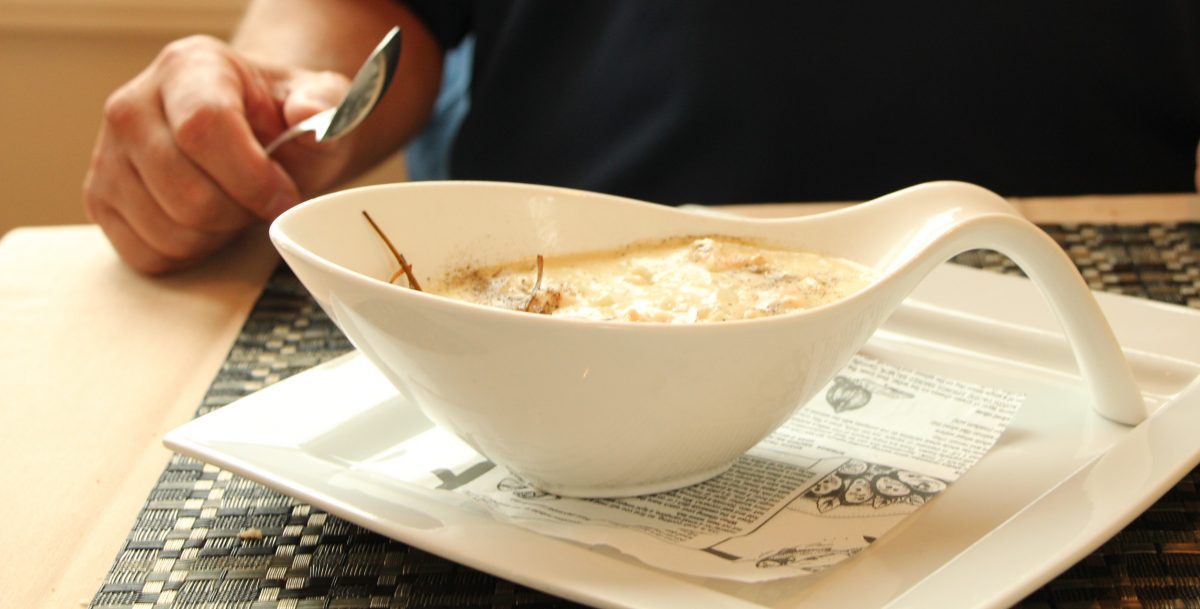 Another ‘go-to’ place is Georgie’s Restaurant located in the Anchor Inn.  I highly recommend Georgie’s fish chowder, full of salmon, cod, shrimp, mussels and veggies in a creamy fish broth. Another suggestion is their ‘sorta caesar’, a Caesar salad with home-made avocado vinaigrette.  The Fisherman’s Wharf platter was the star of the show with cod, salmon, shrimp, mussels, and cod tongues (no..I could not do it), and served with pork scrunchions, or fried salted port bites.  The fish and chips are delicious—fried cod with a crispy Quidi Vidi local craft beer batter. 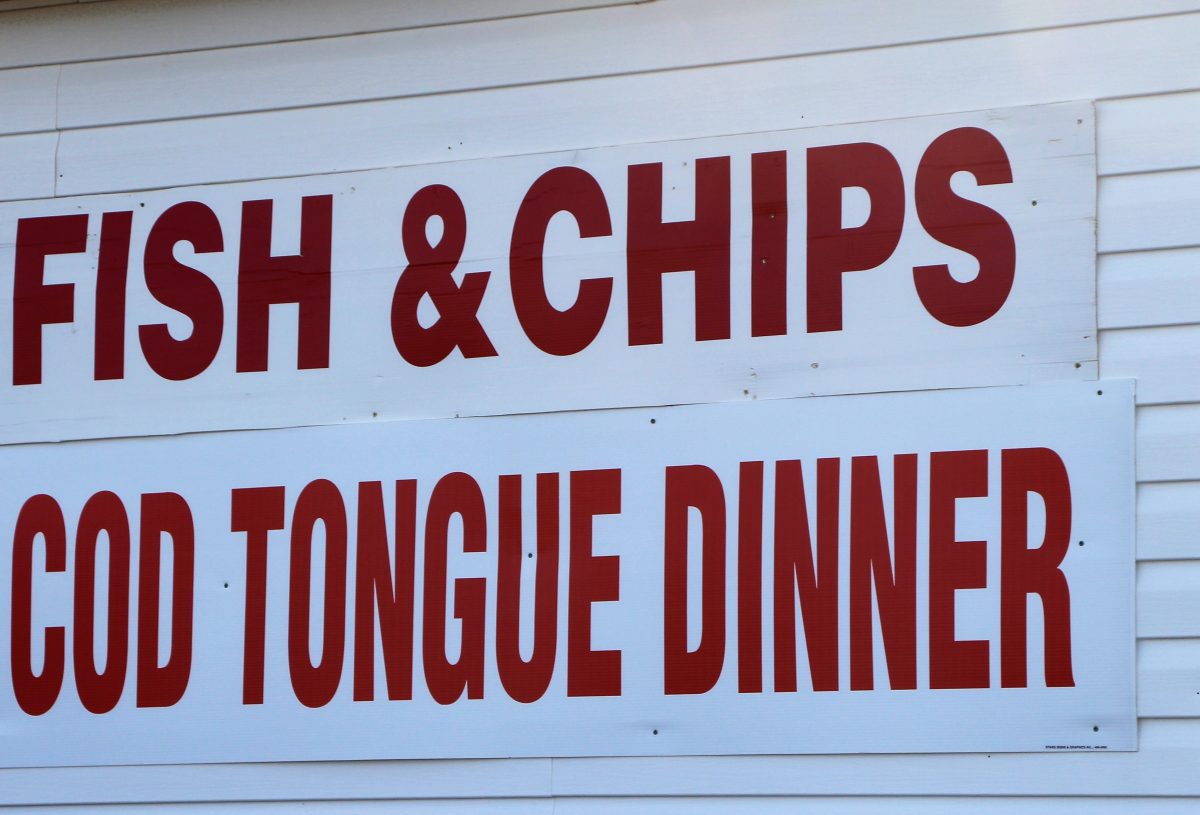 There are a lot of ma/pa restaurants scattered throughout the area and you may be tempted to bypass them in search of something fancier.  Fancy doesn’t always mean fresh or tasty. You will find a lot of cod on the menu, but that’s what   supports the local economy.  What is fresher than fish that is caught in the morning and on your fork by supper?  Do yourself a favour and stop in and say hi to the locals and support the economy.  You won’t regret it. 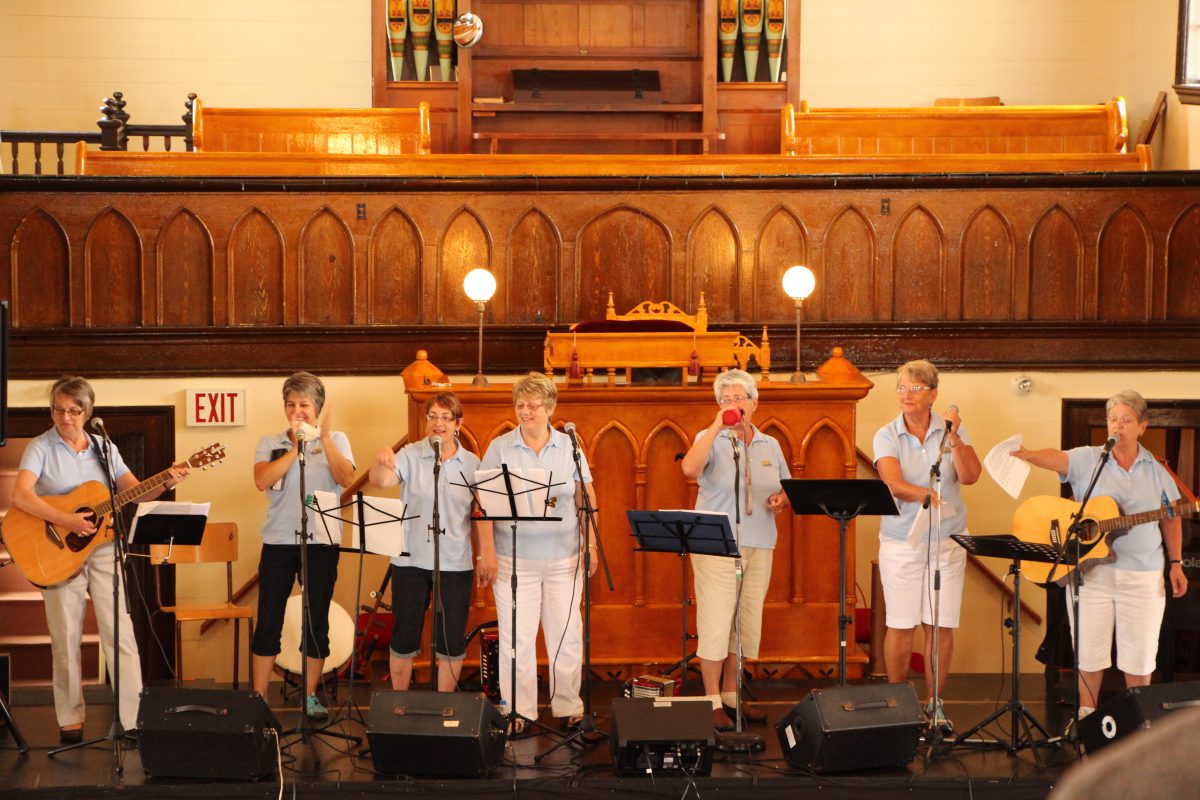 For a small town of about 2200 people, cultural and entertainment events were everywhere. We bought tickets ($10) to see the Split Peas at a local event.  The ‘Peas’ are middle-aged (+) women who sang, played instruments, danced, told stories and had the crowd clapping and on their feet in seconds

They brought the feel of a Newfoundland kitchen party to the stage.  Laughter rang from the rafters—I think I was the loudest. The Peas have been together for more than two decades and this was pure family entertainment at its best.  Make sure you stop and purchase one of their CD’s on the way out or they will nab you and you will wish it was your idea first!

After having a great dinner at Georgies, we made our way to the Captain’s Pub, also located in the Anchor Inn.  This was a small venue, but the beer was flowing, and the musicians put on an energy-packed show with foot stomping music.  It was standing room only and the blend of Newfoundland music and skits kept us entertained and laughing so hard we were bent over. The jigs and reels left you wanting more, several songs were so emotional that you shed a tear, and the skits made me laugh so hard my cheeks hurt from smiling all night. I don’t know if it was just allowing myself to be in the moment, the great music or the energy in the room, but my heart was happy. 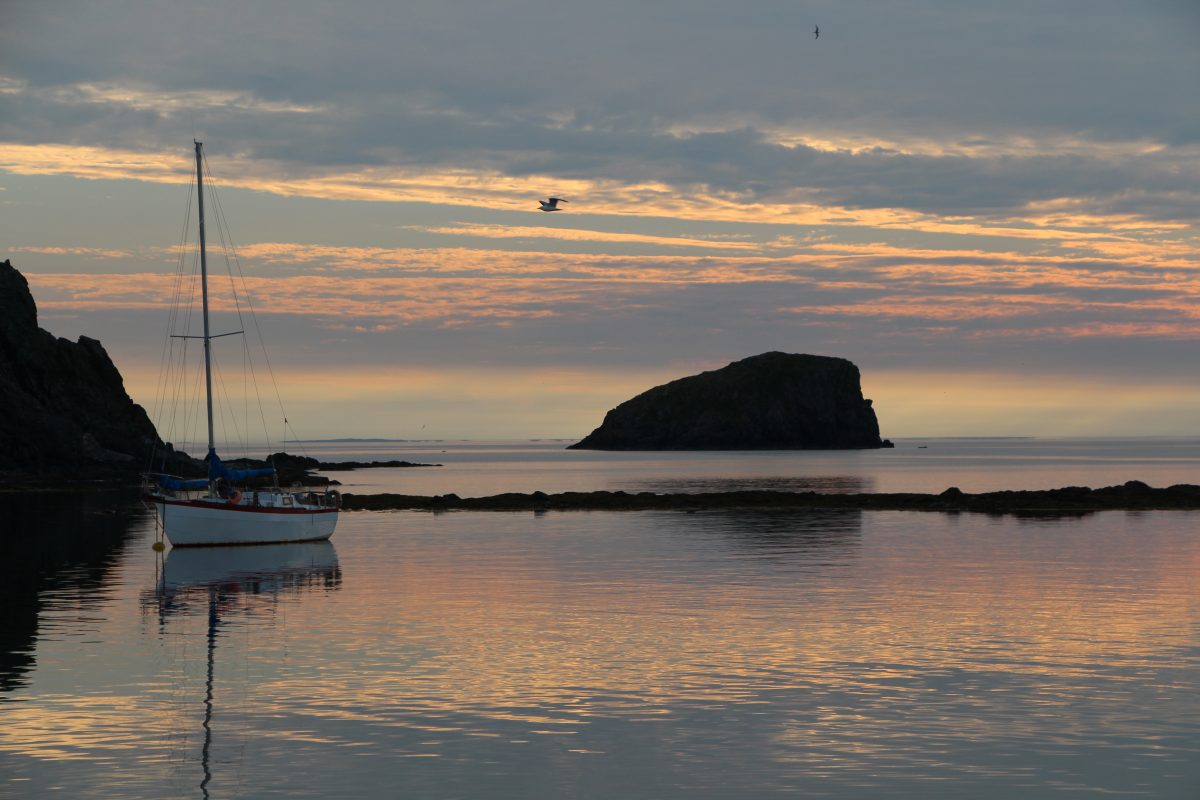 Less Netflix, more sunsets.  I read those words recently and I can’t shake them as they are so on-point. I wish I could share the author with you. The sunsets in Twillingate left me breathless. 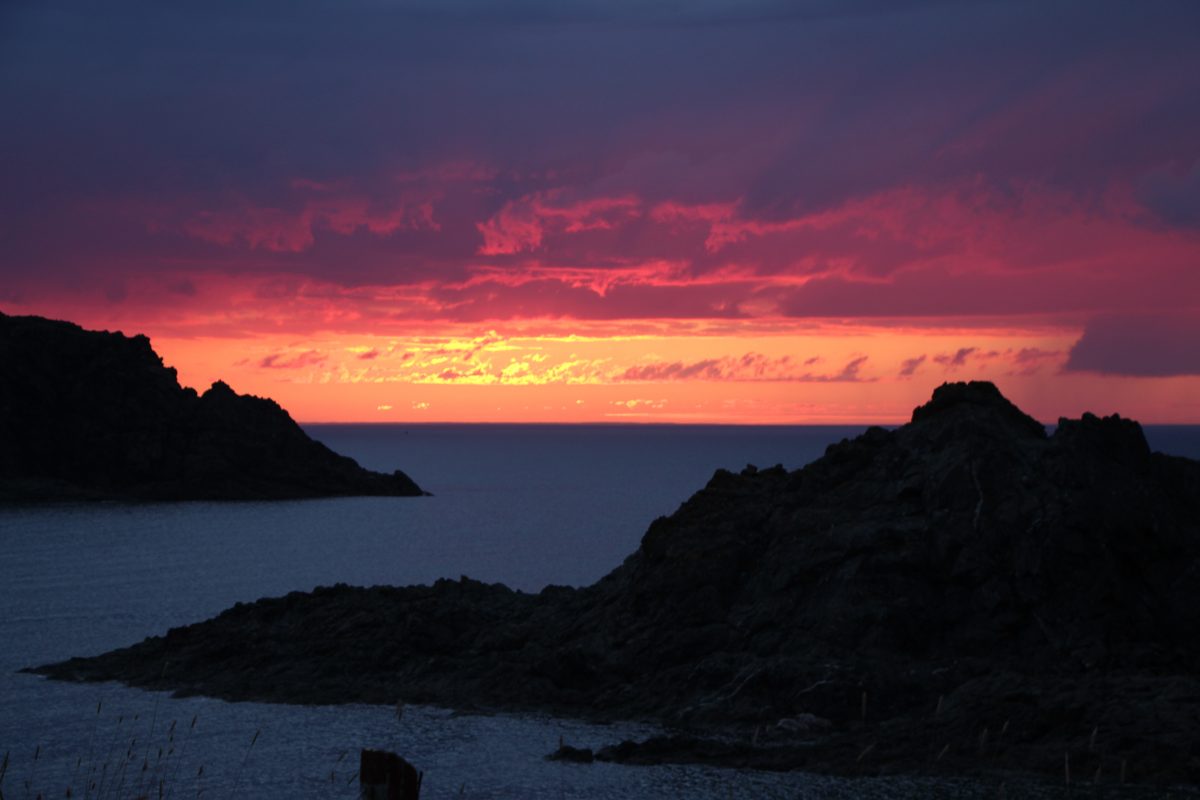 You could make out where the sea and the sky embraced each other at night. The sky was orange and red and purple and yellow and looked like an artist’s palette of colours mixed together. 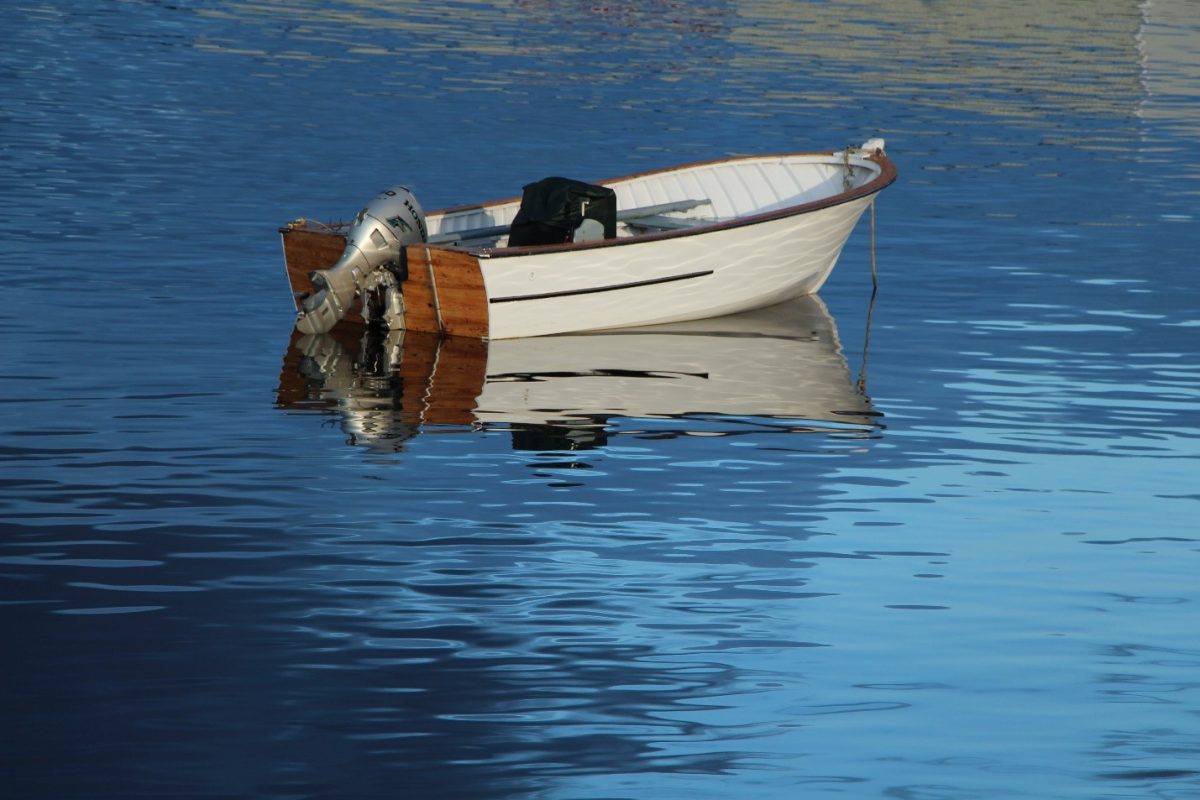 We sat on the rocks and watched the fishing boats come in with their catch at the end of the day.  So peaceful! 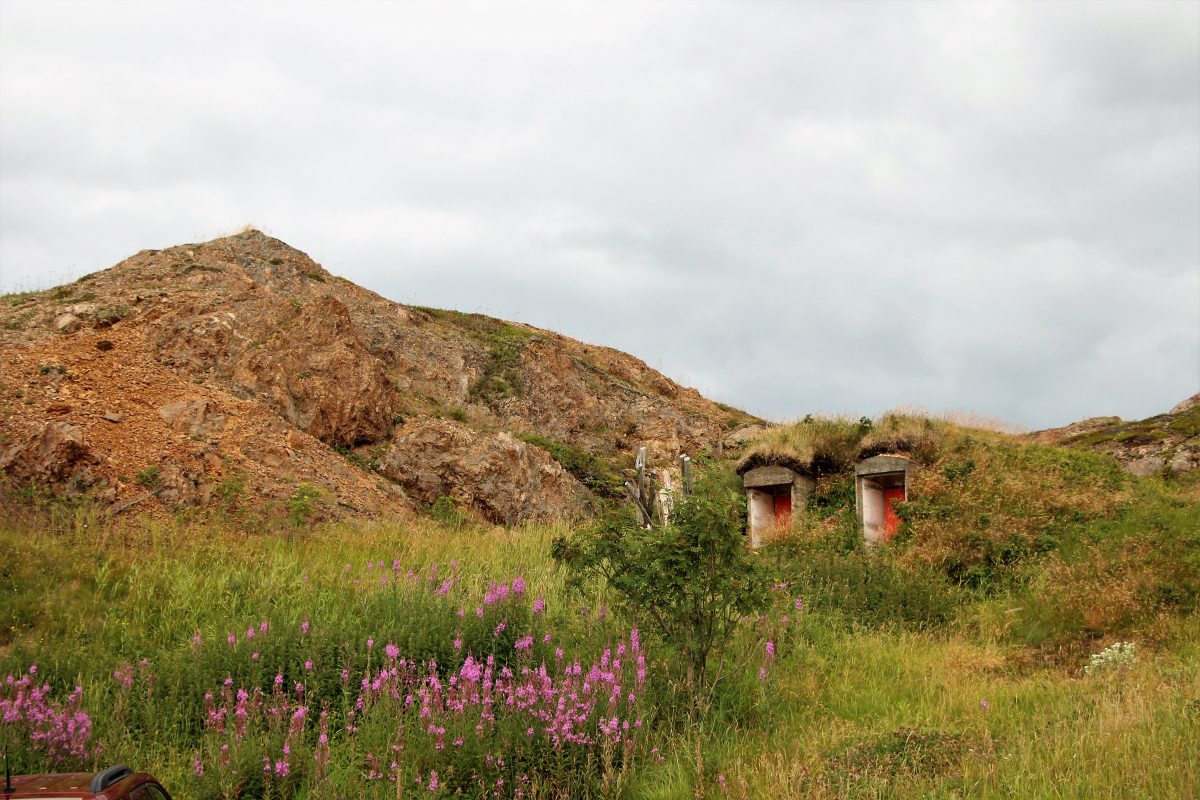 As we drove around the small towns in Newfoundland, we noticed colourful doors nestled in hills and banks that formed part of the landscape itself. These doors led to root cellars which were/are (some are still functioning) traditional root vegetable storage systems.  The natural humidity and moisture keeps the veggies cool in the summer and prevents freezing in the winter.  It’s like a wine cellar for vegetables! 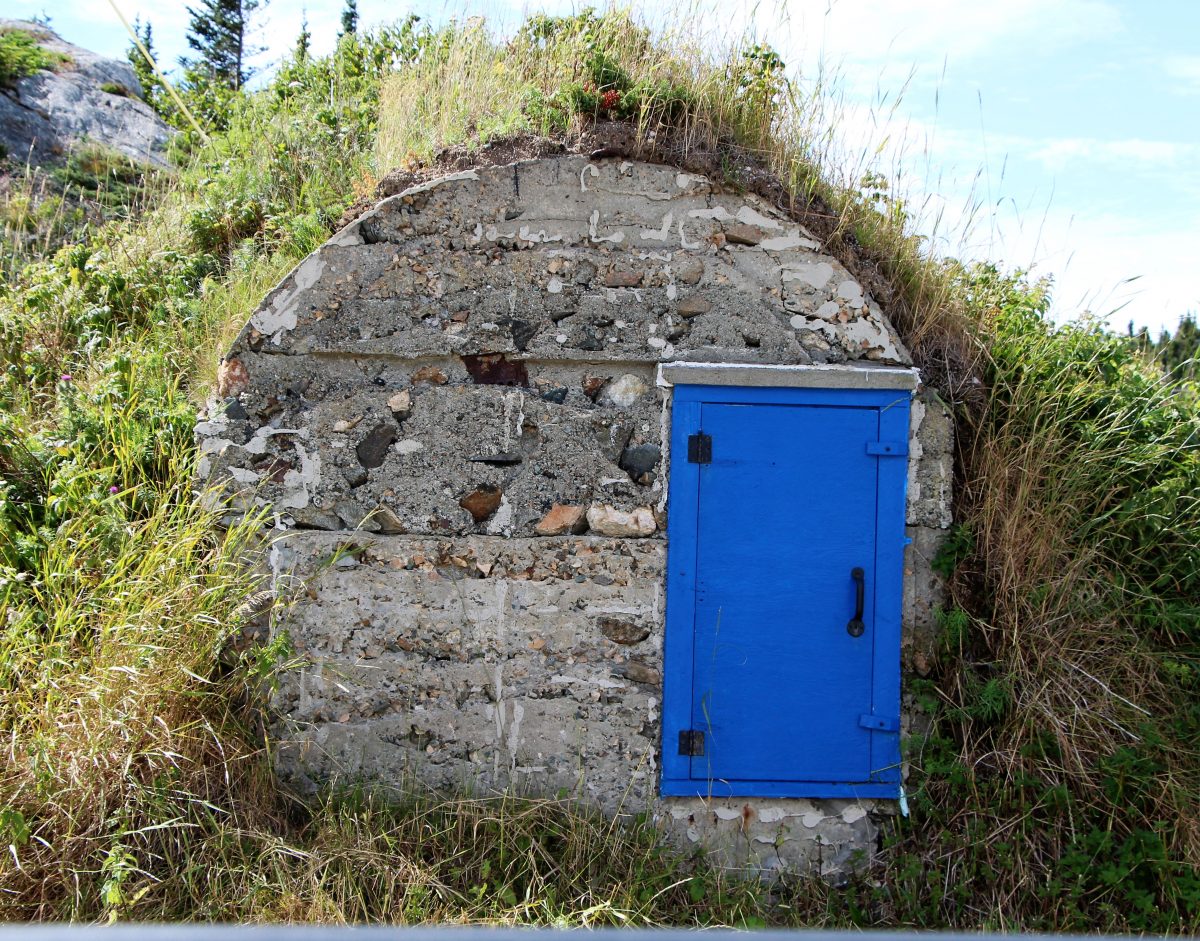 It was fun seeing the doors then reading about them.  It became a game of how many we could find as we drove around, and somehow evolved into the ‘sport’ of punch-buggy!  The bruises on my arm were proof of my loss. 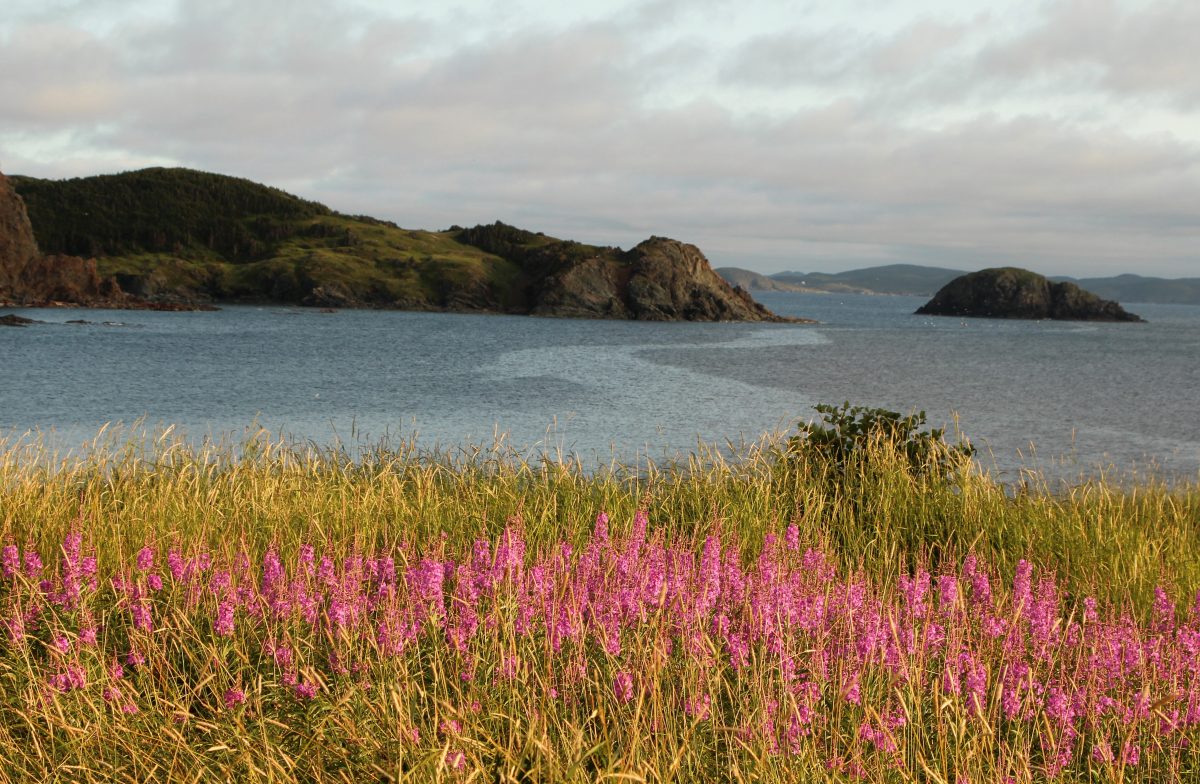 Newfoundland is about food, friends, music and festivals.  It is about colourful places and colourful people. Sometimes in life there are things you just have to do for the sheer joy of it. Visiting Newfoundland is one of those things. It will leave you feeling refreshed and revitalized.  The people are as down to earth as you will ever find and content in their lifestyle. 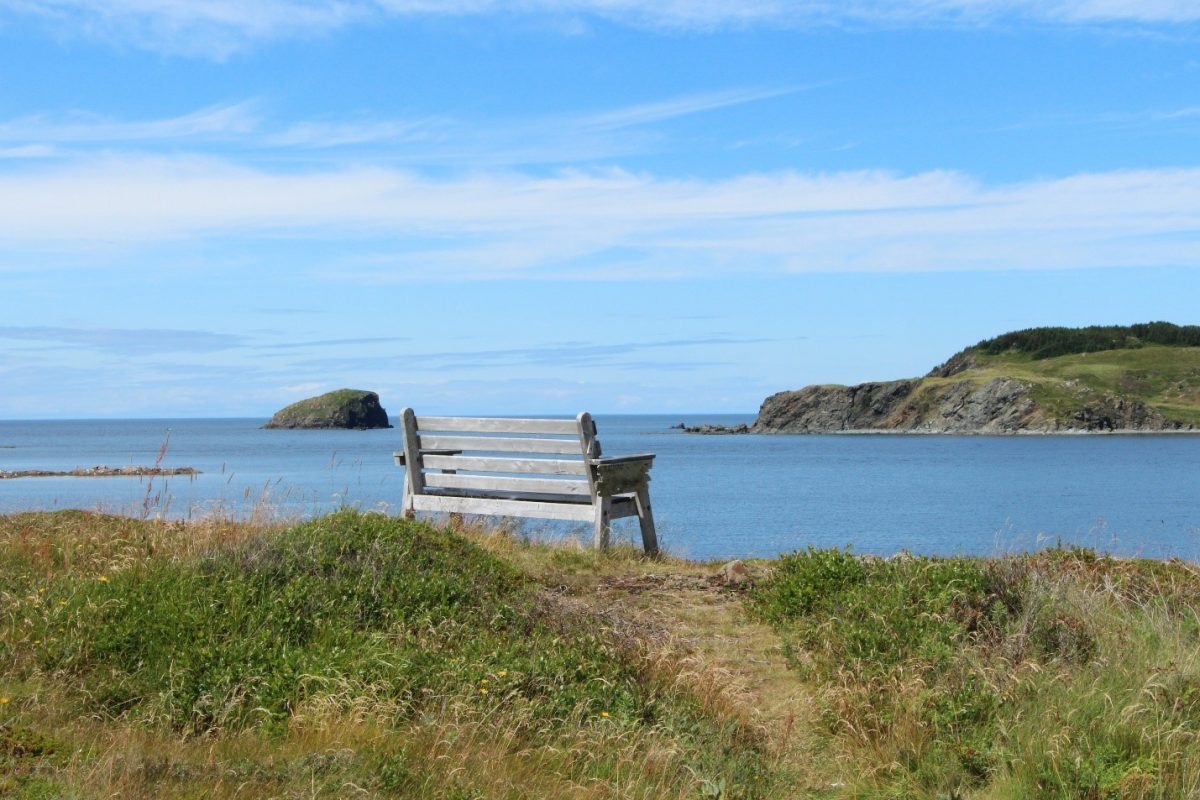 I don’t think there has ever been a greater time when we need to disconnect from the electronic world and just enjoy the sights, sounds and tastes of what is going on around us.   Newfoundland has, arguably, the most dramatic coastline, rich history, a tremendous sense of friends and family and one heck of a way of telling stories.   Do yourself a favour and drop by soon!

Open seasonally from noon till 8pm, seven days a week

No reservations taken….wait your turn

Located in the Anchor Inn and Hotel

Open seasonally from 11am to 8pm